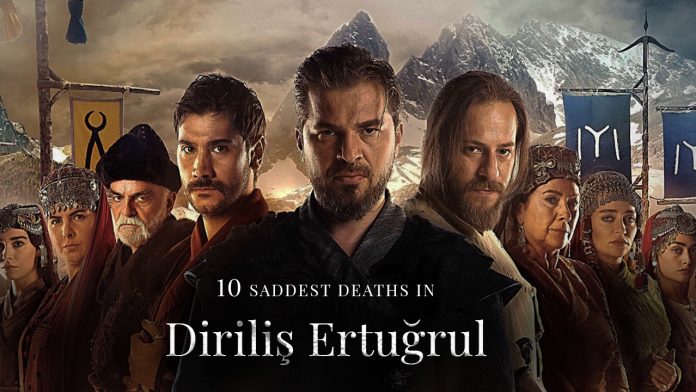 Diriliş Ertuğrul, a historical fiction series that smashed prior season records, is known for its complex storyline and cultural and familial values. The show was extremely adventurous, encapsulating numerous battle scenes and tragedies.

The season couldn’t have had its hype without its versatile and talented cast who played the characters so well that viewers were attracted to them. Viewers identified with the characters, their flaws, and strengths, and grew to like them. So much so that the deaths of some of their favorite characters throughout the course of the series had them in tears.

Let’s discuss some intense death scenes from the series!

The father of Ertuğrul died at the end of season 1 after returning from a mission. He breathed his last in the arms of his sons Ertuğrul and Gündoğdu. He was the chief of the Kayı tribe and his death is the first in the direct family of Ertuğrul.

Yigit, the brave and loyal brother of Halime Hatun. He was killed mercilessly at the hands of Bogac when Ertuğrul and Halime were on their way to the Sultan to announce Yigit’s innocence. This answers the frequently asked question, who kills Yigit in Ertuğrul season. The scene is quite intense as his sister mourns his death, holding his lifeless body in her arms.

He died as a teenager and lived his life in fear of being killed by others for their political benefits.

He was a brave alp who died striving to preserve his people’s lives. He gave his life for the service of Allah Almighty, and his death serves as a magnificent example for every one of the many valiant, heroic alps who died opposing oppression and protecting their people. Samsa Alp embodies that tremendous devotion and readiness to sacrifice for Allah and His cause. His murder in Season 4, as a consequence of treachery and deception from individuals who were meant to be trusted, is one of the most heinous deaths on Diriliş Ertuğrul. The brutality with which his assassins kill him, as well as the fact that he dies alone, surrounded by adversaries, add to the sadness of his death.

Deli Demir was one of the most cherished characters of the series. He was a blacksmith and a storyteller, who shared his wisdom with the tribe people. While avenging the death of his daughter, he lost his life. The whole Kayı tribe mourned over the loss of their beloved man, who was also loyal to Suleyman Shah.

Suleyman (Junior) name sake of Suleyman Shah was the son of Selcen Hatun and Gündoğdu Bey. He died in his youth, enduring extreme torment, and alone without his family. The saddest part of his death is the heartbreak of his mother, who lost one of her two sons.

Many people ask the question who killed Gökçe Hatun? Well, Gökçe was killed by Noyan, the fierce Mongol warrior.

She was used as a pawn by her sister Selcen in the first season and later on in the second, she took it upon herself to irritate her sister and allied with the enemy. Noyan’s men took advantage of the situation to tarp Tugtekin, her husband. Whilst the ongoing conflict Tugtekin was trapped and Gökçe was killed in front of his eyes.

Tugtekin bey the husband of Gökçe Hatun and first cousin and rival of Ertuğrul. He was a brave warrior who at first despised Ertuğrul, yet later on, both of them came to be on good terms.

While trying to save his wife, he got caught by Noyan’s men and was brutally wounded. He later died, with his family by his side. Tugtekin Bey’s death episode is 95, which is often watched a lot by viewers.

She was a ferocious, powerful warrior, an expert in archery,  a loyal and trustworthy friend. People admire Aykiz not just for her numerous talents, but also because she resembles a lot of human beings with doubts and struggles when faced with hardships.

She was burnt by Mongols and later breathed her last while her husband and father sat next to her and mourned.

Turgut, Bamsi, and Dogan the three partners of Ertuğrul in all his missions . Dogan was considered the nicest and kindest of the three. Turgut’s ferocity and Bamsi’s ardor were balanced by his calm nature.  Dogan was liked by people due to his charming personality.

He left behind his pregnant wife and unborn son, who was later named by Ertuğrul as Dogan, the namesake of his father.

Halime Hatun the princess who was saved by Ertuğrul. He fell in love with her and later married Halime who became his strong support. Halime had previously given birth to two sons and died while giving birth to Osman. The scene is tragic due to the viewer’s attachment with the character and its beautiful depiction. While Halime breathed her last, her eldest son Gündüz was calling for her and the youngest Osman needed her nursing. Osman was the one who in the future founded the great ‘Ottomon Empire’.

Other than these intense deaths during the series, one of the most anticipated was the death of Kurdoglu. Kurduglo death in which season? is a common question and the answer is season 1. He was killed by Ertuğrul on the order of Suleyman Shah as Kurdoglu was a traitor.

Another fascinating character of the series is Selcen Hatun and the term people mostly look for is the Selcan Hatun death scene. However, Selcen Hatun never dies in the series. She remains alive and returns in Kuruluş Osman, the sequel of Diriliş Ertuğrul.

These intense scenes added to the beauty of this series. It was a ride packed with emotions and people developed a strong liking for it.

How Many Episodes in Ertugrul Season 2