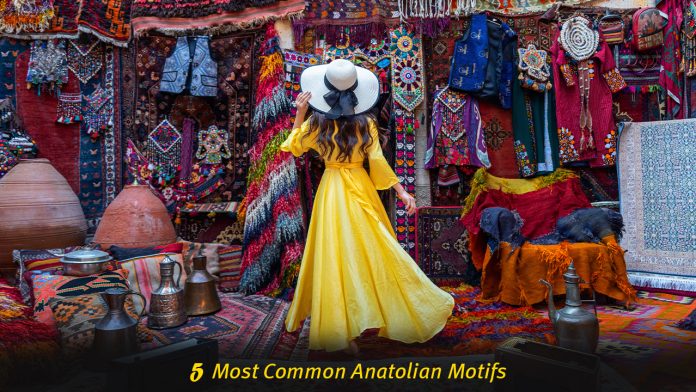 Turkish rugs are popular due to their uniqueness. They are locally prepared. Women in the home are skilled to prepare handmade rugs having Anatolian motifs. These motifs are basically symbols. In the past, symbols were used to communicate and convey messages. They have hidden signs which specific people can understand.

The weaving creativity depends upon the person making it. This art is transformed from generations to young ones. However, There are few Anatolian motifs that are common. There are hidden symbols of the evil eye, women’s features, male braveness, and many others.

Let’s see what are these Anatolian Motifs and their types!

Elibelinde a local word meaning ‘’hands on hips’’. This motif is the representation of the female body with a desire for fertility. This is the most common kind of rugs design you can find in Turkey. These symbols are very traditional and most believable here. These are placed on top shelves as wall hangings.

The message it conveys is that ‘’May the home be filled with offsprings and full of happiness’’. There are many variations in this design now but the main figure of women is still the most favorite among makers and buyers. As the traditional rugs have more value as compared to new designs.

There are other Anatolian motifs too representing fertility such as ‘’Bubday‘’, a wheat symbol. It represents a desire to have kids. Nar, a Turkish fruit means abundance and joy of motherhood gifted from heaven. Similarly, Lale also symbolizes tulip flowers. Which gives the message of the desire to have a healthy child. Apple blossom motif, Ewer, and Cicek all show fertility and purification of women.

Nazarlik means ‘’To protect from evil or commonly used term Nazar. Nazar is considered a myth in many cultures and different parts of the world. But few religions and cultures strongly believe in the bad impacts of Nazar on one’s life. Most babies fall prey to Nazar. When they suddenly get ill or start behaving in abnormal manners it’s considered that it’s happening because of evil eyes. People and their belongings such as home, property are easily affected by Nazar. Even it’s a belief that a bad Nazar can take one’s life too!

Muska have ame intentions of protecting from evil.But these designs are mostly triangles with dots resembling eyes. These Anatolian motifs are an important part of every hand woven carpet. They are considered to ward off negative energies from home. These rugs are mostly used in the sitting area of home.

There are many other symbols related to evil eyes such as the use of wolf feet and wolf mouth. ‘’Yilan’’, the motif of the snake.‘’ Akrep’’ a motif of Scorpio. Then there are ‘’Parmark’’, meaning finger and comb Anatolian motifs. All these are used by wavers to protect from unfortunate happenings and discard their negative effects.

In Anatolian culture, the abundance motif has its own importance. It’s a matter of human nature to desire for more. Fruits, vegetables, are used to represent happiness. Treese, flower blossoms, and leaves represent different phases of life. Which fulfills the human desires of each phase of life.

These woven pieces are used to decorate homes as covering utensils, kilims and table tops.

These symbols are taken from surrounding nature. Such as rocks, mountains, sea, all represent abundance of spring.

Ram’s horn was used as an instrument by men to summon people on important occasions. Which now represents male strength. It’s a celebratory symbol of masculine , heroism of men. Just like Elibelinde represents females , Ram’s horns are hidden symbols of male power.

Those women who are in the weaving industry, and use this motif in their rugs are considered to be expressing their wishes to marry a strong man with tall height and masculine features. How stunning is to know the story behind every motif!

Anatolian religious motif ‘’Mehrab’’ is part of every Muslim house. Basically, Mihrab is a kind of niche in Mosque. This motif is mostly woven in prayer rugs and big floor carpets. This motif indicates the direction of Kaaba. So, wherever you see this motif of an arched doorway, it’s the right direction.

You will never find animals or living objects with these motifs as these are solely for prayer. Muslims can’t offer prayer with any other shape resembling a human figure or animal appearing on praying mates.

Other religious symbols are ‘’Hayat Ağacı’’ known as cypress trees or palm trees which are always made in the upward direction. The branches are spreading and light falling on top. Giving the hint that there are two phases of life and we will be back to our creator.

Digging Turkish history is always very interesting. There are traditional symbols that show power, love, desire to marry, money, status, and abundance of health. But these are not limited. The list is endless. The most astonishing thing is that these symbols date back to 500 BC. Turkish history is phenomenal. It’s not sufficient to explain all symbols within one piece of writing.

Stay hooked for more interesting inside stories of Turkey!