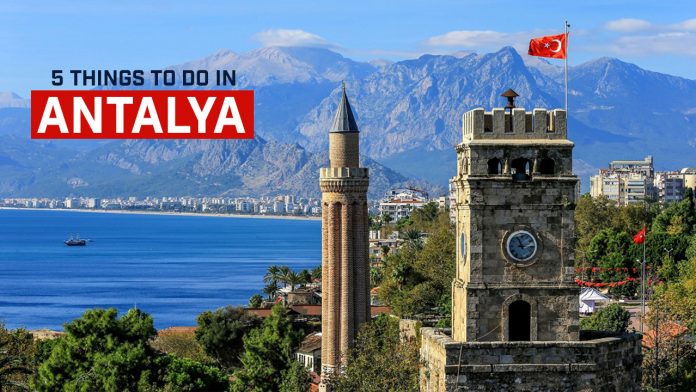 When you think about a Turkish Resort City, Antalya is the first one that comes into mind. Antalya is one of the most famous Turkish cities, popular for its hotel flanked, sandy beaches, historical architectural sites, and a yacht-filled Old Harbor. The city lies in the southern region of Turkey touching the Mediterranean Sea and is known as the Turquoise Coast for its blue waters. Antalya has seen a lot of influx of people both locals and international travelers in the past few years, thus earning the title of “Capital of Turkish Tourism.” If visiting this famous coastal city, it is recommended to spend around 3 to 5 days to enjoy the time there.

Here are the 5 things to do when you step out into the city.

Lara Beach is a blue flag beach stretched along the coast in the eastern part of the city. It is the most popular beach in the city attracting tourism to its white sands. This beach is bordered by the city’s most luxurious hotels. If you are planning to visit Antalya, then taking a hotel located here is a must. Each hotel has its own private areas and there are decks attached to them over the water where beach lovers are seen sunbathing. Various activities, including live music, live drink bars, and food kitchens are the attractive points of the beach. Watching the sun setting behind the Bey Mountains will surely make your evening hard to forget.

If you are looking for some interesting activities to do around Antalya, then book yourself a half-day river rafting tour is a must. The blue–green colored water of the Köprülü River gushing between the beautiful high cliffs attracts a lot of rafters towards it. The river is one of the most famous white water rafting destinations and will give you a whole new experience. Rafting is done in groups and requires teamwork, thus becoming a nice place to socialize.

Old Town, also called Kaleiçi, is a neighborhood built like a maze and a perfect destination for an evening walk. Strolling through the red-roofed and whitewashed Ottoman Mansions lined up in the streets is a moment to remember. Although the place gives an old-world look, it has many tourist attractions like stone-clad clock tower and the Tekeli Mehmet Pasa Mosque, boutique hotels, cafes, and souvenir shops to visit.

Just below the town, lies the Old Harbor. On the first site, you’ll see a swarm of docked yachts, gently dipping in and out of the waters of the Mediterranean. From the 2nd century up till the mid- 20th century, this Harbor had been the economic hub for the city, bringing trade and prosperity to it and the surrounding areas. You can explore the bazaar which stretches over the cliff, watch the sunset at a café while taking a sip of your coffee or tea, or even take a yacht and head out to the open sea for sightseeing.

Land of Legends is a theme park and one of the best tourist attractions in the city. It is Turkey’s first magical kingdom designed especially for kids and adults to set free their adventurous spirits and feel the joy of unlimited entertainment. From the main entrance till the very end of the park you feel like entering a land of fantasy. The park has four parts. A waterpark filled with different water pools and huge slides for you to play on. There is a Dolphin show held in the same place as well where you can enjoy watching these friendly creatures showing their skills. Then there is the theme park filled with enormous and fast roller coasters and many other rides to take. There is a luxurious hotel on one side of the park and a shopping district for you to explore around with many branded shops and a Venetian-style canal flowing between them. At night you can enjoy various themed live shows made for kids. Overall it is a place one must not miss when visiting the city.

5.    Hadrian’s Gate and Other Historical Sites:

When entering the Kaleiçi district, you may see a historical gate-like structure built during the Roman era. This structure is called the Hadrian’s Gate and is one of the main entrances to the district. The three-arched gate was built in honor of Emperor Hadrian’s visit to the place in AD 130 and decorated by sculptural decorations. There are many other historical places to visit which go back to the time of Roman rule over the land but these sites are mostly out of the main city. Some of the notable names are Aspendos, Termessos, Perge, and many other places for people who like history.

5 Things to do in Cappadocia