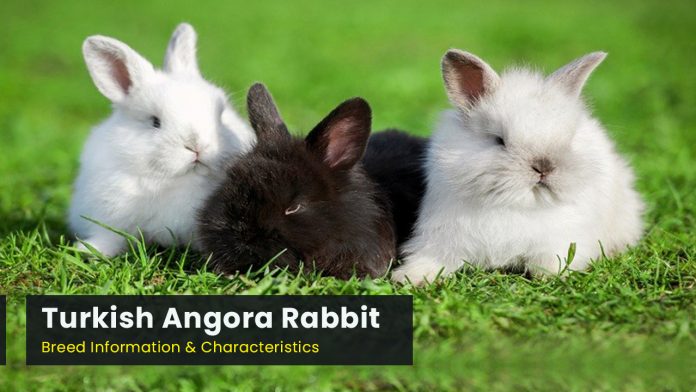 Angora rabbit is one of the oldest breeds of domestic rabbit that originated in Angora that used to be Ankara in the past. Angora tends to be a variety of rabbits and not its breed. It was bred for its soft, fluffy, and long wool. In the 18th century, Angora used to be very popular as a pet initially in French and then in Europe. In the United States, the Angora rabbit (English Angora rabbit) appeared in the 20th century and was bred at a massive scale for its long wool. Its soft wool could easily be removed by shearing or combing.

Following are some breeds of Angora rabbit.

Angora bunny is the oldest domestic rabbit that was mainly produced to get the wool called Angora Wool. The wool of rabbits is very valuable as they are not allergic to anything like other animals do. Angora rabbits, therefore, were bred to produce long fibers of wool. Angora rabbits are small in size with broad and flatheads. Their whole body is covered with thick fur. The Angora Rabbit Coat is thick enough to use as wool. In many regions, their wool has been used to prepare warm clothes. The length of the fur grows up to 6 inches every season. Whereas the ideal length of their fur is between 2 to 3 inches.

The following are some characteristics of Angora rabbits:

Size: The size of Angora rabbits depends on the type of breed. However, they used to be very small and round.

Wool: They are mostly bred for the purpose of wool that used to be very soft and silky and help in the production of clothes.

Weight: The average weight of Angora rabbits ranges from 2 to 5.5 kg. The weights also depend on the type of breed.

The following are some characteristics of Angora rabbits based on their breed.

Giant Angora rabbits are the largest breed in this variety as recognized by the ARBA. Also, they produce more wool as compared to Satin or French Angoras. They have a commercial body type in ruby-eye white color and a dense coat of wool on their skin. Their head is oval in shape, narrow at the muzzle, and broad all across the forehead. They produce more wool than the Satin, English, or French Angora. They mostly appear in ruby-eye white colour. Their average body weight is around 5.5 kg.

As recognized by ARBA, English Angora rabbits have the smallest breed. It is the only breed that has its eyes covered with hair. Some of the varieties in English Angora rabbits are found by ARBA which include broken, shaded, self, agouti, white, ruby-eye, and pointed-white, etc. The average body weight of English rabbits ranges from 2 to 3.5 kg.

French Angora rabbits are very huge in their physical appearance. It is different from the German or Giant breed of Angora rabbits as they do not have any hair on the front feet and face, with just minor fur on the rear legs. The wool fiber of French angora rabbits is very smooth and silky in texture. However, it is lightweight and gives enough warmth with its coat.

Each breed of Angora rabbits has two major health concerns that refer to Wool mites and Wool block. As they have wool all over their body that is more prone to some kind of insects or parasites.

Just like this, Wool mites are the skin parasites that affect the Angoras more as compared to any other breed of rabbits as they are covered with thick fur and hair. Due to wool mites, the skin of rabbits gets flaky with patchy hair. Its treatment is to use some skin ointments or powders.

Wool block, on the other hand, is caused when the rabbits eat their own fur. The digestive system of rabbits gets disturbed as it gets hard for them to digest their foreign matter. In case of excessive accumulation, the fur becomes a blockage in the body and ultimately leads to death. To avoid this health concern, the best practice is to remove the fur of rabbits every 3 to 4 months.

Other than these concerns, just like other animals, rabbits need nutrition for proper growth and strength. They need lots of fresh water and leafy greens as their food. Moreover, give them space to run and play which actually plays a vital role in their health.

If you want to buy one, find out where Angora rabbits are available for sale. The price of Angora rabbits starts from $70 and could go beyond based on the breed. Just like gray wolf(national animal of Turkey), Angora rabbit is beautiful and famous worldwide.