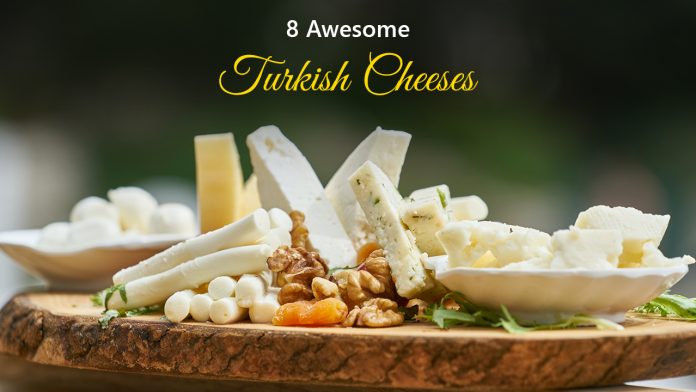 Did someone say cheese? A Turk will always say a yes for cheese. Their day begins with cheese, then lunch has traditional cuisine having cheese and moving onto dinner, so no sofra is complete without cheese. As Turkey has influence from many other countries which is depicted by their meals too. That’s the reason one can find 200+ cheese varieties in Turkey.

They prepare cheese at home. These traditions are passed from elders to younger generations and they are happily adapting older techniques of fermenting cheese at their own place. Whether it’s Kasarli Kofte or Muhlama , cheese is an important component of Turkish cuisine.

Mihalic is the oldest known cheese of Turkey. It belongs to the Bursa area. It has been named after the town of production Mihalic which is now called Karacabey.Locals used to make Mihalic cheese with sheep milk. But now it has been replaced with cow milk. Even it’s an open choice of raw milk of sheep, cow or goat.

Dating back to the Ottoman empire, this cheese is placed in a brine for a longer time. After fermentation, It gets an elastic cheesy texture. Then, it’s salted and dried before sending to markets for sale.

It is either cut into slices or sold in a ball shape. Due to its saltish taste, it is mostly used for grating over olive salads and baked dishes. Not only this, Mehalic cheese is used as a side dish along with Meze and Kebab dishes.

Locally called ‘’Orgu Peyniri’’ has roots in Diyarbakir, mainly the southeast area of Turkey. This is not an ordinary cheese. A special method is adopted to prepare plaited cheese. This is the art of our masters who know exactly how to make cheese in plaited form.

A mixture of cow and goat unfermented milk is used. Then, it’s fermented with Siran yeast to get a fluffy look. Next, it’s placed in brine to complete the process. This salty cheese is considered to be a necessity for traditional Turkish breakfast tables.

Lor is another Turkish cheese type that has a unique taste as it’s unsalted. Due to this feature, it’s mostly used in desserts and for grating on them. Pastries look appetizing when they are having layers of sprinkled cheese over them.

This white cheese is similar to cottage cheese which is popular outside of Turkey. But Turks love Lor cheese. This cheese tastes yum when mixed with herbs. Belonging to the region which is rich in the production of crops, herbs, and spices. How can they forget to blend cheese with spices and present a unique Lor Turkish cheese?

Tulum peyniri, a very creamy and mouth watering cheese is very common in Turkey. Mostly it’s produced in mountainous areas of Turkey but it’s loved by the whole nation.

Tulum cheeses are very common and are some of the creamiest of the Turkish cheeses. They have a high moisture content that melts perfectly into just about any dish and their long shelf-life as well means that Tulum is just about perfect for mixing into any main course.

Tulum cheese is made salted by keeping it in salted water for months. Which makes it rich in salty taste. After this, cheese is left to settle down for 5-6 months. This cheese is served with butter, walnuts and makes the combo delicious when given along bazlama bread.

It’s flavors vary from region to region. Some like salty, some are more towards bitter and few like to give sweet taste.

A mild flavor cheese close to mozzarella cheese is loved among Turkish kids. Commonly made in the Bilecik region, Dil is preferably consumed in fresh form. The more it gets older the more it becomes stingy. In its molten form, its smell becomes unpleasant due to which it’s not used for topping on pizza.

It’s sold in rectangular shaped logs but also cut into smaller sizes for house use. This Turkish cheese is best served at breakfast due to its mild milky taste and fresh feel.

Van Otlu is more eaten in areas that grow herbs. Its main specialty is the mixing of herbs in cheese. Locals love to have goats and cows in their homes. So, when there is more production of milk, they use milk to produce Van Otlu cheese. They produce numerous varieties of Turkish cheese by adding 30 different locally grown herbs.

Their aroma is to die for! Fresh herbs and home made cheese are a lethal combo which locals enjoy a lot in the spring season.

Labne a spreadable Turkish cheese is unique just like its name. Bright white in color and very light in texture, this cheese is more common on dessert tables. Labne Turkish cheese is used by spreading over bread and eating out by enjoying the freshness of cream cheese.

This is sold in plastic tubs or glass jars. It’s best to use it when it’s freshly prepared. Serve along savory dishes and pastries to get a delightful experience!

Cecil cheese or Civil cheese is different from the rest of the Turkish cheese as it’s in thread form. It’s soft in texture, low fat, and saltish in taste. It can’t be prepared in homes. A particular method is required to make this. It has many healthy properties such as rich in protein, sodium, and contains high levels of calcium. Which is very beneficial for bones. It’s not acidic in nature so can be consumed without thinking about chemicals.

This traditional Turkish cheese needs to be placed in a cold place. Which does not mean to put it in the freezer. Store it in an airtight jar so that its freshness remains intact.

How to Do a Turkish Get-up