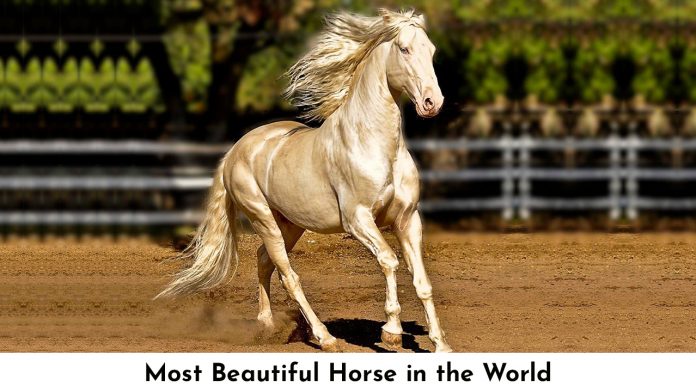 A horse is considered to be the most precious, faithful friend of humans. From ancient times, it has significant value. From taking part in the war to the only mode of transport, horses are a symbol of bravery and freedom. Many people love to keep them as pets and do horse riding as it is known to be called as the conveyance of rulers.

The universe is full of beautiful horses but the crown goes to the Akhal-Teke horse. Let’s see what makes this horse rank number one!

What are the characteristics of Akhal-Teke?

Horses are always named after their speed, intelligence and endurance. That’s why a person who owns a horse is considered wealthy. The Akhal-Teke breed is known to be the oldest breed of horses.

Now the question arises, why is it so famous? The answer is, due to its “metallic sheen’’. Their skin is so silky and smooth that it reflects sunlight.

God has created them in many amazing colors. Which varies from jaw dropping chestnut, cremello, palomino and black beauty.

These Akhal-Teke are praised worldwide. Chinese have named them “Horses From Heaven’’. These horses are adaptive to severe climatic conditions.

The Akhal-Teke breed goes back to historical times. They are a direct breed of extinct Turkoman horses. They originated in a desert area. Where weather conditions are the worst. No food, no water, and no shelter even for humans. They survived with their nomadic locals. That’s why the bond is still strong today!

In history, the first official breeding farmhouse of Akhal-Tekes was made in 1881. It was named on the tribe where this breed was first raised.

The Size of heroic Akhal-Teke Horse

This breed has great tall size. They stand from 56 inches to 64 inches. Their average weight is 900 pounds to 1100 pounds.

Akhal-Teke As A Status Symbol

In the past, during wars, these horses were used for raiding in hidden places occupied by enemies. They were specially prepared for performing during a war. Their speed and stamina was observed and bred for extraordinary qualities.

Now, as time has changed, Akhal-Teke has become a status symbol. They are properly trained for dressage and pleasure riding of the owner. Not only this, they take part in long-distance jumping, polo, and many other racing sports.

In modern times, these Akhal-Teke breeds are considered very rare. They are sent all over the world for breeding and preserving their special racing genes and stamina.

Akhal-Teke horses are not only noticeable due to their appearance but also due to their behavior. They make humans spellbound with their beauty. Their gaits during locomotion are extraordinarily smooth.

They understand their owner’s commands easily. Even it is said they can learn new things in a short time span as compared to the rest of the horse breeds.

Even today in drama series, an affectionate relation of horses with their masters is shown. Such as Dirilis Ertugrul. Do you know they used 200 + horses for their shooting!

Akhal-Teke is called One-Man Horse due to their devotion to their master. That’s why they need simple soft commands to perform any action. How amazing is the fact that a horse can understand you more than a human!

The Akhal-Teke’s diet is very special. No doubt it has evolved from desert background but with the passage of time, new dietary plans were tested on them in order to make them stronger and to boost their stamina. Today, they are given a balanced diet of grass, grain and meat.

The Akhal-Teke made its first historical record in 1935. When a group of riders traveled 2500 miles by riding on this most beautiful horse. The journey was not easy. It was a far area, crossing over the desert, barren lands, spending days without food and water. But this hero did it and got the crown!

The akhal-Teke breed has some common health issues. Some of them occur due to genetic mutation while some due to weather and unhealthy dietary plans.

When a newborn horse foal is born without hair on its body, the condition is called naked foal syndrome. This may result in other abnormalities of jawbreaking and digestion issues.

This makes horse gait unbalanced and results in neurological deficiencies. However, veteran guidance is necessary to cure Akhal-Teke suffering from this disease.

How To Groom your Akhal-Teke Horse

The most important thing to keep a pet is taking care of it like your own kid. You have to be very gentle towards their cleanliness. Be polite with them and develop a bond with these creatures.

All you need is to brush your horse twice a week with a soft bristles brush. Don’t do this haphazardly. Be nice to them. Remove their dirt and debris stuck in their tails. Use clippers to remove uneven hoovers. Keep an eye on their hooves to check injuries and other viral infections. Use mild animal shampoo to wash them. In this way, you can make your Akhal-Teke stand out in the crowd!