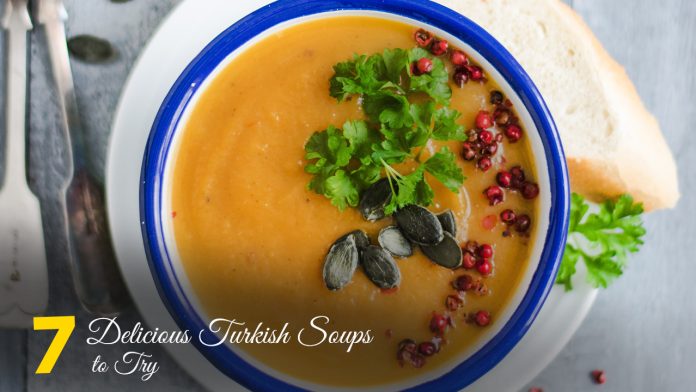 Turkish soups have a special fan following in Turkish cuisine. Just like their traditions and history, these soups are also renowned across the borders. Making soup seems like a very easy dish but it requires skill and proper methodology to prepare. You need to be very careful in adding material as to what should be used first and needs how much cooking time.

In the Turkish language, soup is called ‘’Corba’’ which combines two words: salty and love. The trend of Turkish soups dates back to the Ottoman empire. According to historians, less privileged people depended upon soups as they could not afford two meals a day. However, these soups were very economical and nutritious for daily consumption. These soups do not need a specific recipe to follow. People made it with their creative taste buds by adding their favorite vegetables and spices.

These traditional soups have a strong impact on their culture. Turkish soups are used as a term in many idioms and phrases even today. Most commonly used are ‘’Being salt in soup’’ which means to be in trouble.

No doubt Turkish soups have certain importance in the Turkish cuisine. They have healing power, are full of healthy nutritions, and most importantly are cost friendly.

There is the soup for every occasion in Turkey. They offer Bride soup, Festive soup, and wedding soup which is very common to serve to prestigious guests. There is a tradition of bridging soup where Turks visit a patient. It’s considered a very humble present as well.

In Turkish cuisine, soups are mostly made with meat, and water called broth. They are created by adding flour to make it thick, grains, legumes, dried herbs and offals. Then there is a variety of vegetable soup, milky and yogurt mushroom soups.

These soups are named mostly after their region or the main ingredient in it. For example Red Lentil soup. Another thing is that they name it after the master who created the master recipe.

We have created a detailed list of best Turkish soups for our readers. Let’s have a closer look!

If you ask a local what is your favorite Turkish soup? The answer would be Tarhana soup! It’s equally loved by all age groups. Tarhana soup originated in Anatolia. It’s now popular in Turkey but the most traditional one is still in Anatolia.

Tarhana soup is prepared by adding veggies, spices, and locally grown herbs. All these ingredients are dried and crushed to make a powder. The next step is adding yogurt. This soup is enriched with minerals and vitamins.

Winter season is best to prepare dough which is then fermented to use throughout the cold season. This dough can be stored and used for a longer run due to its durability properties. Locals start preparing this traditional Turkish soup at the end of summer, so they can get the best soup for the whole winter season.

Red Lentil soup, known as Mercimek corbasi, has a healing power. If you take this soup, it will be very beneficial against the flu and cold.  This soup is not only comforting but also very economical due to the ingredients in it. Turks don’t rush to hospitals when they get affected with a cold, because they know they have a magical soup which can make them perfect without taking costly medicines.

Red lentil soup is made with vegetables such as fresh carrots, potatoes, and onions. Broth is used to make this soup more delicious. It’s a very nutritious soup due to which it’s advisable to serve it to toddlers. As a result, it boosts their immunity and makes them stronger.

Ezogelin soup has a very unique yet sad story with its origin. There was a girl named Zohre who lived in a small village in Turkey. She was very pretty. She married a person who did not survive due to her beauty. She came back to her home. Her parents remarried her but she was very sad. Her new home was near the Syrian border. So, she was very hungry one day. She went out looking for food but found only a few herbs and veggies. She prepared this dish and it became very popular. That’s why it’s named ‘’Ezo: bride’’ after her. She died in 1956. But her recipe was written in many books and now is part of Turkish folk songs too!

This soup is often confused with red lentil soup but it’s different from its sister soup. It has mainly rice, mint, lentils, and onions. Tomatoes are added to enhance the taste. This Ezogelin soup is easily available in restaurants and can be prepared in homes as well. All thanks to Zohre who gave this yummy soup to the world!

Chicken and Vermicelli soup are very popular among kids. The reason is its main ingredients i.e. chicken and noodles. Chicken broth is used to add healthy value to it. Noodles are my all-time favorite. When it’s winter and too cold to go out, noodles are life saviors. This is a quick recipe and can be prepared easily as it has no long procedures and lengthy ingredients list.

This soup sounds delicious in its own way. It’s prepared with cow stomach as the name says. This Tripe soup is historically very famous as it goes back to Ottoman empire times. Currently, it’s mostly prepared during festive seasons such as Kurban bayrami. Turks do know that every part of a sacrificial animal is useful. That’s why they make dishes out of it.

The key ingredients are ginger and lemons.  This is a strong soup that is known to have the best remedy for headaches. It’s also used locally after a party night. Although it has a strong aroma and taste due to the immense amount of ginger it’s on the top list of mostly locals.

It’s advisable to prepare this tripe soup at home as compared to in restaurants. The reason is that it needs to be clean before starting the cooking process.

Yayla Corbasi has roots in the Black Sea region of Turkey. This area is mountainous and mostly has dairy farms. Due to lush green fields, it’s favourable for the growth of dairy animals. That’s why dairy products are produced in plenty here. Hence, the main ingredient of this soup is yogurt.

It is made by adding rice and butter. This creamy soup has egg yolk in it. Then the final ingredient is dried mint which is added by mixing in boiling hot oil. What a classic taste! This is commonly called Mother’s favorite soup among locals due to its healthy ingredients.

Tomato soup is popular worldwide due to its amazing aroma. One cannot refuse to taste this delicious soup prepared with fresh tomatoes. There are many cooking ways of preparing the famous Domates Corbasi but the end result is awesome in every case.

Tomatoes are grown throughout Turkey. Mostly locals have these in their gardens. They love to pick fresh tomatoes from their gardens and prepare Tomato soup.

This Tomato soup is finalized by adding cheddar cheese on top and serving bread as a side. What else can one crave on a winter foggy night? Surely a bowl of creamy, rich hot tomato soup is the answer!