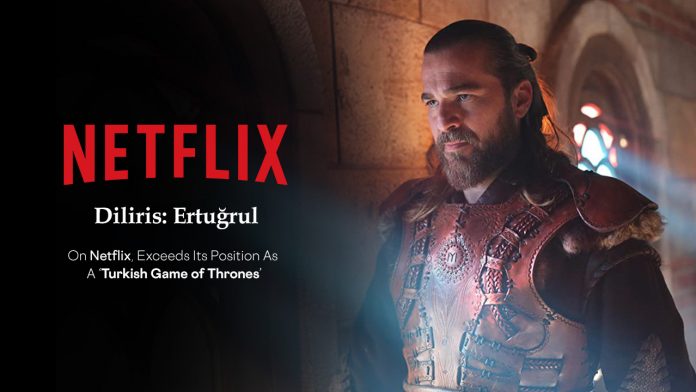 If the name Diliris Ertugrul does not sound familiar, then you need to watch it now.

This is an epic historical series that originally aired on TRT from 2014 to 2019. Its narrative centers on Ertugral Ghazi, an Oghuz Turk who wages medieval campaigns against the Crusaders in Anatolia, the Mongols, and Christian Byzantines. He is famously known as the father of Osman I, the founder of the famous Ottoman Empire.

The show has consistently led TV ratings in Turkey with its tagline ‘A Nation’s Awakening’. This reflects on when President Erdogan established the constitutional referendum in April 2017 as an effort against those who opposed Turkey. Diliris Ertugrul also takes viewers back to a time where Aleppo in Syria was once an economic and cultural hub. The charismatic Engin Altan Duzyatan plays the lead role of Ertugrul Bey who embodies everything righteous. Season 1 focuses on his nomadic Kayi tribe’s search for a permanent settlement and it is this quest that takes him to places with foes like the Knights Templar. On a hunt, Ertugrul encounters a father, son, and daughter whom the Templars are transporting as prisoners. He rescues the trio, brings them with him, and sets off a chain of events that define the future of his tribe.

As we see, the members of the Kayi tribe hold certain customs and traditions dear to their hearts. Although Diliris Ertugrul glorifies valor and sacrifice in several action-packed sequences, it oozes warmth and tenderness that signify exactly what Turkey stands for. Notably, every episode begins with a note explaining that the events shown are based on Turkish history. The show is ripe with evil schemers whose plots have ramifications that essentially change the course of history. In particular, Diliris Ertugrul goes beyond offering a perspective of Islam for the non-Muslim world to consider. It effectively tackles the architecture of modern-day Islamophobia, paving the way to debate over who exactly came up with the definition of morality in the first place. This indicates that the Turkish blockbuster is more than just a popcorn television show as it encourages spectators to revisit and rethink their beliefs.

The values and endeavors of Ertugrul and his tribe do not point to patriarchy. They depict a societal order that blurs the lines between the roles of men and women. The actresses are leaders, healers, and caregivers in their entirety, addressing the stereotypical representations of females that is rampant in many series today. Although one may argue that the gender roles in Diliris Ertugrul are rigid, Ertugrul Bey, Halime Hatun, and many others do not stop themselves from bending and breaking rules. The storyline and script do not objectify, belittle, or hate women as many do nowadays, especially online.

This brings us to the Turkish Game of Thrones label that is making rounds on the Internet. A side-by-side comparison of Diliris Ertugrul and Game of Thrones (GoT) not only helps viewers decide which show is right for them. It is more than just a matter of how Diliris Ertugrul is family-friendly because the drama does not contain any explicit or inappropriate content. In addition to being immense in scope and story, the Turkish sensation is artistic and poetic. It offers a healthy dose of philosophy, and one of its most striking aspects is the massive scale of production. With a runtime of around 440 hours, every frame is elegant, with lush visuals and memorable background music of the Steppes. Despite its overall length, the writing and craft set the fast pace of the first season, leaving viewers with no choice but to ask ‘what’s next?’

Diliris Ertugrul puts forth clear expectations from the very beginning. From promising drama and intrigue, it presents more intelligent and resilient evil schemers as we progress. How can we forget the spectacular war scenes and the hand-combat where every single element is stitched together to perfection? There are no fanciful buildings or dragons, but certainly dragon-hearted leaders and lovers. These iconic figures are driven by social, political, and personal ambition, and with what they have to offer, we do not need the winged mythical creatures of GoT.

Call it a creative expression of soft power or a masterpiece that further strengthens Turkey’s reputation as a large exporter of TV shows. Diliris Ertugrul is the gold standard for the massive amount of work that goes into delivering a product that entertains as well as leaves a mind-altering cultural impact. It is no wonder PM Imran Khan has praised the show more than once and how he instructed PTV to dub it in Urdu for a larger local audience. Even prominent Pakistani brands have realized the business possibilities and sought the services of Diliris Ertugrul’s cast members for their upcoming projects.

If this provides you food for thought, then you might want to look forward to Jashn-e-Ertugrul. This is a ticketed 3-day event that will see Duzyatan traveling to Lahore, Islamabad, and Karachi. Fans will get an opportunity to meet the star in person and ask him questions as he is set to make appearances on stage. Don’t miss out on this, and keep visiting our website for the latest updates!