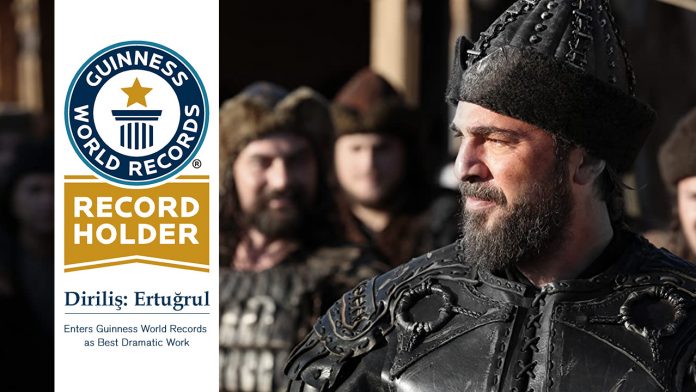 The historical series earned over 3 billion views and has been translated into 39 languages. It left a deep impact on audiences and according to online reports, went on to enter the Guinness Book of World Records as Best Dramatic Work in History.

Released in December 2014, Turkish blockbuster Diliris Ertugrul is based on the life of the 13th-century Oghuz warrior Ertugrul Ghazi. He was the chief of the Kayi tribe and a man on a mission whose conquests were the stepping stones of the foundation of the famous Ottoman Empire.

Often referred to as the Turkish Game of Thrones, Diliris Ertugrul soon became a global sensation with a massive following on streaming giant Netflix. It gained immense popularity in Pakistan during the COVID-19 lockdown from March 2020 and fans wanted more even after completing all the episodes. Premier Imran Khan also lauded the drama and issued special directives for PTV to dub the show in Urdu so that it could reach a larger local audience.

Diliris Ertugrul features high production values and it is evident that the creators put a lot of thought into this masterpiece. Unlike most big-budget series, the show is educational and evokes a strong sense of Muslim pride. It gives viewers a glimpse into a glorious Islamic past where iconic figures prepared the groundwork for the achievements of Osman I, Ertugrul Bey’s son.

Notably, Pakistani actress and VJ Anoushey Ashraf praised the show after its Guinness World Record achievement. Known as a big fan of the series, Ashraf previously addressed the remarks of people who criticized the series. She applauded leading Turkish celebrities Engin Altan Duzyatan and Esra Bilgic’s success as Diliris Ertugrul reportedly marks a new world record. Ashraf reacted to the big news on social media as she commented on Diva Magazine’s Instagram post. The VJ and talk show host emphasized on the quality of the show, storytelling, camera work, and character performances. Stating how art/cinemas bring people closer together, Ashraf hoped that Pakistani audiences would get to see more Turkish, Iranian, Lebanese, and Egyptian content in the coming years.

Capitalizing on the success of Diliris Ertugrul, brands have rushed to bring cast members on board with their latest projects. Only recently, Duzyatan and Bilgic became brand ambassadors of prominent local businesses, with the former slated to visit Pakistan on a 3-day tour from 9th-11th October. In what is already being called the biggest event of the year, ‘Jashn-e-Ertgrul’ will see Duzyatan meeting fans in Karachi, Islamabad, and Lahore, and responding to questions on stage. Also, if you view Bilgic’s latest social media post, you will see the caption ‘Khaadi’ which hints at a possible deal with the popular Pakistani clothing brand.

Not long ago, leading clothing brand Maria B. announced Didem Balcin as the model for its upcoming Winter collection. Founder Maria Butt even visited Turkey and posted a selfie of herself with the Ertugrul actress on Instagram. Cengiz Coskun and Nurettin Sonmez, the actors who played the roles of Turgut Alp and Bamsi Beyrek respectively, signed an agreement with J. on its latest line of fragrances. Burcu Kiratli aka Gokce Hatun appeared in a photoshoot for Pakistani designer Ali Xeeshan, stunning fans with her elegant attire. Furthermore, the talented Cavit Cetin Guner visited Pakistan last month and delighted fans as he listened to Pakistani folk music and rode a beautiful white horse.

We expect Diliris Ertugrul and its spin-off Kurulus Osman to break more records. Meanwhile, gear up for Duzyatan’s visit and don’t miss the opportunity to see him live on 9th October. There are only three days to go, and we are excited to see what happens next!