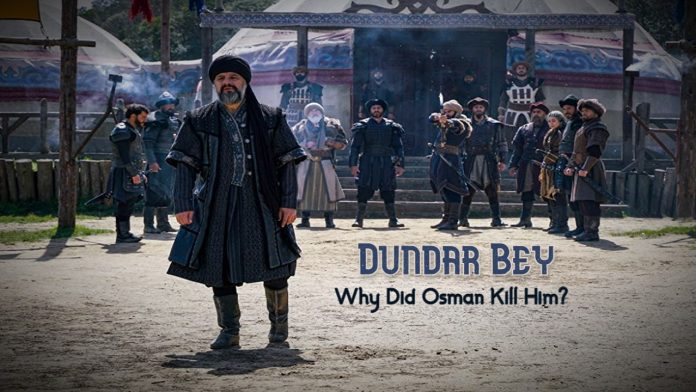 The youngest of the Kayi family, Dundar Bey was the last son of Suleman Shah and Hayme Hatun. Born in 1210 CE, he was the youngest brother of Gundogdu Bey, Sungurtekin Bey, and Ertugrul Gazi and the uncle of Osman Gazi. Dundar Bey has a mixed character shown in the series of both Dirillis Ertugrul and Kurulus Osman. Throughout the series, we saw his two-faced character resulting in many ups and downs of the tribe.

Although Dundar Bey was Hayme Hatuns dearest son and she always used to take his side whenever there was a rift between the brothers and that made him grow weak. He was always dependent on Ertugrul Bey and his mother when making decisions and when he faced difficulties being alone, he failed miserably. In this article, we will learn about the character and why Osman killed Dundar Bey.

The character of Dundar Bey is played by two actors. In Ertugrul seasons 1 and 2 we see Arda Anarat playing the role of a young Dundar Bey and in season 3 Batuhan Karacakaya brilliantly plays the role of a more mature and grownup character.

In the first season, Dundar was a young lad keen on becoming an Alp (Turkish soldier). He used to practice with wooden swords with his friends and was always motivated to take place along with his elder brothers in battles. In the mid of the first season, Dundar was seriously injured and went into a coma when he saved his tribe from a big loss. He was ambushed by enemies but before fainting, he set the barn on fire to give a signal to the tribe that they were in danger. Hence others were saved but Dundar had to sacrifice his life by doing so. The rest of the season he remained in bed unconscious while his family kept praying for his life.

However, Dundar managed to stay alive, and when the season ends he went to training grounds with Bamsi and Halime Sultan’s younger brother Yigit. In the second season, he returned to the tribe as a fully trained Alp. He used to always support Ertugrul Bey among his brothers as he was his idol. He also migrated with Ertugrul to the Byzantine lands lending his support to him.

In season 3 Dundar was shown as a more mature character acting as a lieutenant of Ertugrul Bey. He always stood side by side with his brother and even became the leader of the tribe when Ertugrul was fighting death. Becoming the leader for some time, Dundar became more confident that he can rule over his tribe and this is where things started to go south side for him. He used to make decisions on his own and started enforcing them on the tribe, even if the Kayi people opposed him. He also resulted in the death of Ertugrul’s blood brother and a senior alp, Dogan Alp by revealing the secrets of his mission to his love interest, Gunyeli who then revealed it to Ertugrul’s bitter enemies. Dundar was banished from the tribe but returned when he again managed to save the tribe from an attack.

In season 4, Dundar became the Bey of the tribe when Ertugrul Bey was taken away by the Christians after being ambushed. The tribe thought he died but this was not true. Meanwhile, Dundar’s weak heart made him sell the Hanli Bazaar to the opposing forces even though everyone disliked the decision. Ertugrul showed up on time surprising everyone that he was alive and well and managed to stop Dundar from selling the Bazaar. This is where Dundar Bey was banished again and sent to his brothers, Gundogdu and Sungurtekin’s tribe. Dundar did not return in season 5 or Dirilis Ertugrul.

Dundar Bey is one of the leading characters and antagonists in the series of Kurulus Osman. Played by Ragip Savas in both the first and the second season, he managed to portray the negative character of Dundar Bey brilliantly.

The series introduced us to the Dundar’s family. Dundar bey’s wife in the Ertugrul series was not shown but was discussed somewhere in the season when Hayme Hatun was told how her sons were doing in the other part of the tribe. Although Dündar bey had two wives in kurulus Osman, Zohre Hatun and Hazal Hatun. Dundar Bey had 2 children from Zohre Hatun and one from Hazal. He had a son and a daughter from Zohre and only a son from the latter. Dundar Bey’s sons’ names were Batur Alp and Bahadur Alp while his daughter’s name was Aygul Hatun. By the end of the first season, Zohre Hatun was killed by Dundar Bey’s second wife, Hazal Hatun on the wedding eve of Osman and Bala Hatun because Zohre was caught poisoning the food cooked for the feast.

Dundar Bey became a sworn enemy of his nephew, Osman because he thought Osman would oppose him in every matter of the tribe. Being the most senior bey of the tribe in the nonpresence of Ertugrul Bey, Dundar wanted to become the leader of the tribe permanently whereas, Osman thought that he deserves his father’s throne. Dundar played some vindictive games and sometimes partnered up with enemies to stop Osman in every way he could and even attempted to assassinate him. Dundar did not only had problems with Osman but also his daughter, Aygul. Aygul Hatun started blaming her father for using her to fulfill his needs to gain power by marrying her to Alishar Bey (another Osman’s foe).

Why Did Osman Kill Dundar Bey?

In the second season, things began to get clear for Dundar Bey that he could not become the leader of the Kayi Tribe. Ertugrul Bey returned to the tribe but was suffering from serious health issues. Everyone knew that his time was here to leave the world and some senior Beys started gathering the support of the tribe members, to become the next leader. Ertugrul, however already chose Osman to become his successor and that grew Dundar’s jealousy towards him.

After the death of Ertugrul, Osman gained control over the tribe and kept Dundar under his leash so that he may not do anything wrong. In the nonpresence of Osman, Dundar used to take care of the tribe’s matters and from this, he used to take the advantage of sneaking up to the enemies to gain an alliance with them in order to demoralize Osman’s reputation.

In the middle of the season, Dundar made a mistake by accidentally dropping his ring somewhere in the Sogut Bazar while trying to escape after assassinating a Christian spy who knew Dundar’s truth and was about to tell it to Osman. This ring was found by Malhun Hatun (Osman’s second wife in the series) but she did not return it back to the owner and neither informed Osman about it. This ring cost many lives throughout the rest of the season, as Osman did not know about this clue, which could have led to the real traitor in the tribe. Dundar also informed Aya Nikola about a trap that Osman was setting up which led to a great war between Osman’s and Nikola’s army resulting in the martyrdom of Savci’s (Osman elder brother) son.

Dundar Bey’s death was nearing as he himself dug up his grave. The suspicions of Osman grew bigger and he started to believe that Dundar bey was the real traitor. His doubts became true when Omer Bey (Osman’s father-in-law) showed Osman the ring which belonged to Dundar Bey. Dundar Bey was caught eventually and Osman gave the order of his execution.

Dundar Bey’s death scene was sad for many of the fans as his journey was coming to an end. Before executing him, Osman forgave him of his mistakes, after all, he was his uncle and blood relation. Osman shot an arrow in his heart which resulted in his death instantly. Many of the fans were happy and relieved by his death but Dundar Bey’s character ended on a very sad note.