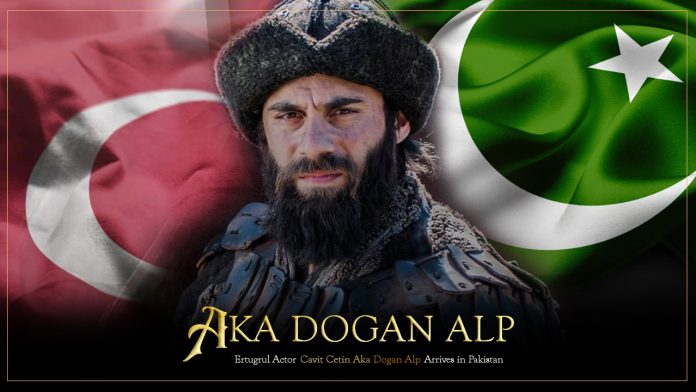 Guner informed fans and followers about his arrival via Instagram where he is seen enjoying a Pakistani folk music performance with mesmerizing melodies of the sitaar. He posted the video clip in one of his stories which he captioned ‘Goooood morning, Islamabad, Pakistan’. Enthusiastic fans did not waste any time showing him love as ‘Welcome to Pakistan #Cavitcetinguner’ became the top Twitter trend in Pakistan upon his arrival in Islamabad.

The Turkish actor interacted with joyful fans and participated in a horseback ride. Photos of Guner sitting atop a beautiful white horse instantly became viral on social media. Earlier, he delighted his vast fan base when he posted a photo of his boarding pass and announced that he will be visiting Pakistan soon.

The popularity of Turkish stars surged in Pakistan when Diliris Ertugrul became one of the most-watched shows during the COVID-19 lockdown. Prime Minister Imran Khan personally recommended the epic Turkish series as its episodes were dubbed in Urdu to reach a larger local audience.

Engin Altan Duzyatan, famous for playing the lead role of Ertugrul in the drama, has also confirmed his much-awaited visit to Pakistan. Quoting Frontiers World, a London-based events management institution, Turkish news agency Anadolu reported that Duzyatan will be traveling to Pakistan. A three-day star-studded tour from 9th-11th October ‘Jashn-e-Ertugrul’ will see Duzyatan meeting fans in Islamabad, Karachi, and Lahore. To add to the excitement, he will hold an exclusive Q&A session on stage and fans can capitalize on this event to learn more about their favorite actor.

Notably, in August 2020, the Blue World housing society in Lahore appointed Duzyatan as its brand ambassador. A Pakistani publication revealed that the actor would be traveling to Lahore to sign an agreement with the brand. Blue World further stated that fans can expect an announcement from its team soon. As of now, it has not announced any official dates for Duzyatan’s visit for the inauguration of the mosque that the company is responsible for. This mosque is the replica of the majestic Blue Mosque in Istanbul, Turkey.

With Diliris Ertugrul becoming a nationwide-hit among Pakistani viewers, visits from Turkish stars are sure to strengthen cordial ties between the two countries. This seems like the beginning of one of many collaborations between Turkey and Pakistan, with news about Duzyatan’s work with a housing scheme in Islamabad circulating on social media.

Where does this leave us? With Kurulus Osman season 2 on the way, we expect an equally successful sequel with memorable performances from a talented lineup of actors and actresses. Perhaps, Burak Oczivit, the man who plays the leading role of Osman I in the show, will visit in the near future as well.

Only time will tell, as we look forward to more good news from reliable sources. We will keep you updated about Cavit Cetin’s visit to Islamabad as we learn more about his time here with us. Keep visiting our page for more exciting updates!