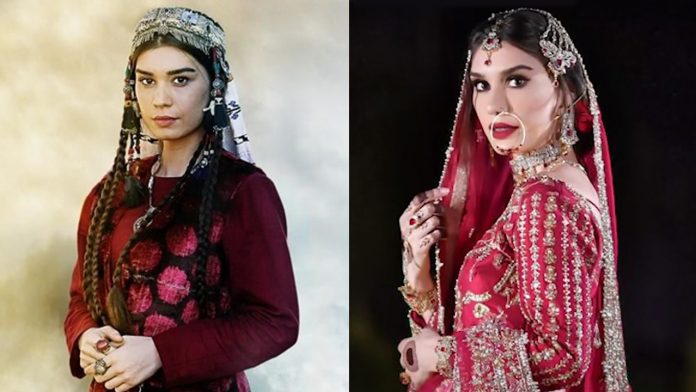 The cast of Turkish sensation Diliris Ertugrul is making headlines around Pakistan with leading actors and actresses becoming the new faces of prominent Pakistani brands. They have a huge fan following in the country, and many big names in business have been quick to capitalize on the opportunity to work with them.

Engin Altan Duzyatan, who played the titular role, signed a contract with Blue World City, a housing company. Next, Esra Bilgic, known as Halime Hatun in the drama, worked with telecommunications network Jazz and mobile brand QMobile. Only recently, Nurettin Sonmez and Cengiz Coskun, known for portraying Bamsi Beyrek and Turgut Alp respectively, became the brand ambassador for J. Fragrances. Clothing giant Maria B. also announced Didem Balcin, the Turkish actress who played the role of Selcan Hatun, as the model for its upcoming winter collection.

Who after this legendary lineup collaborated with a famous designer from Pakistan? It is none other than the stunning Burcu Kiratli who portrayed Gokce Hatun in the series. Blessed with naturally good looks, Kiratli delighted her fans and followers as she shared pictures of herself on Instagram wearing designer Ali Xeeshan’s outfit. Her bespoke attire stood out in what appeared to be a bridal photoshoot with a beautiful background of clear skies and water.

Even the tiniest details in Ali Xeeshan’s work are enough to mesmerize viewers. The strapless blouse that Kiratli is wearing comes with statement sleeves and an intricately embroidered teal and crimson dupatta that completes her glamorous look.

In her post, Kiratli mentioned that she worked with a great team and informed eager fans to wait for the continuation. Does this mean that we can expect more pictures of her in Ali Xeeshan’s creations, or will she collaborate with other Pakistani names on upcoming projects? The best thing to do is to follow her on social media and see what she comes up with next.

It is always good to see Pakistan working with international celebrities. These collaborations with Diliris Ertugrul’s stars will only pave the way to further projects that strengthen Turkey and Pakistan’s friendship. Do let us know what you think by signing up and participating in our forum. Also, don’t miss out on Duzyatan’s visit to Pakistan from 9th-11th October. He will be touring Lahore, Islamabad, and Karachi on a ticketed event and fans can even ask him questions on-stage to learn more about him.