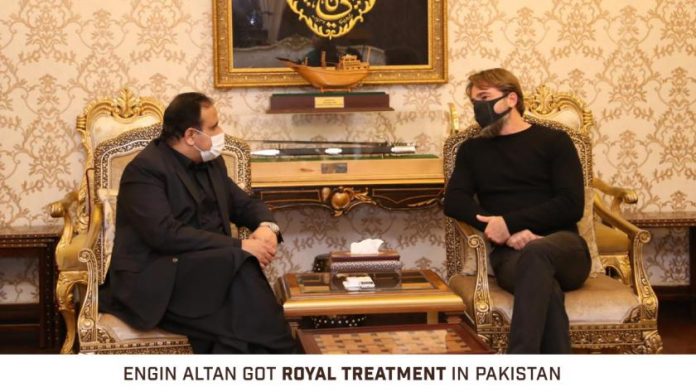 We have some great news as we approach the end of the year. Engin Altan, the sensational Dirilis Ertugrul leading actor, finally visited! The news of Engin Altan arriving in the country broke the Internet as everyone rushed to welcome him. The legendary actor in the epic historical sensation Dirilis Ertugrul paid a brief visit to Lahore. Due to his short stay, he could not visit the other cities of Pakistan. People showered him with traditional gifts and souvenirs as a token of their love and appreciation. Let’s see the highlights of Engin Altan’s tour to Pakistan!

Engin Altan aka Ertugrul was invited to Pakistan by businessman Mian Kashif. He signed a deal worth 17 crores PKR for the brand ambassador of Kashif’s private company. Engin Altan arrived in Lahore on Friday 11 Dec 2020. He was personally received by Mian Kashif. The sudden news of his arrival both surprised and pleased eager fans who wanted to know about his stay here. So, Kashif presented him with a beautiful red roses flower arrangement with the initials of his name. Engin Altan was delighted and touched by the hospitality of the people of Pakistan.

The Chief Minister Usman Buzdar hosted a meetup session for the Turkish star at the CM house where he thanked him for coming to Pakistan. Buzdar stated this will benefit cross-cultural relationships between Pakistan and Turkey. Buzdar commended his acting skills and encouraged him to act in other historical series.

It is a known fact that various Pakistani brands approached Engin Altan to work with their companies. A private paint company invited him for a head office visit. The chairman of the company Khawaja Ejaz Ahmed welcomed the Turkish superstar and thanked him for his visit to Pakistan. He presented Ertugrul with traditional swords to honor his character in Dirilis Ertugrul.

His fans gathered around him and took some memorable photos. Engin Altan was seen enjoying these happy moments to the fullest.

A luxurious jewelry and watch brand presented Engin Altan with beautiful, delicate cufflinks set and a glamorous, pure leather belt. The private jewelry and watch representative stated that these accessories were designed keeping in mind the classical yet stylish personality of Engin Altan.

Engin Altan is fond of historical places in Pakistan. He showed interest in visiting cultural and historically rich places, and he went to the famous Badshadhi Mosque. He was greeted by the Imam of Badshahi Mosque Maulana Abdul Khyber Azad who gifted him a traditional shawl.

He also visited Iqbal’s tomb and paid his respects to the Poet of the East, Dr. Allama Iqbal. He shared a story on his Instagram stating ‘’R.I.P Muhammed Ikbal’’. This story was seen by millions of his fans around the globe.

Engin Altan participated in a press conference where he thanked the people of Pakistan for appreciating the historical Turkish drama series Dirilis Ertugrul. He commented that the positive response from fans in Pakistan was a joy, and personally thanked Premier Imran Khan for recommending the show. He is quoted as saying:

‘’I would extend my gratitude to PM Imran Khan for praising Dirilis Ertugrul and bring this historical drama series to Pakistan.’’

Further, upon answering the media professionals, he expressed his thoughts about working on Pakistani projects. ‘’I would more than love to take part in Pak drama or film provided the right opportunity. When I will receive a qualitative script, I will definitely sign it!’’

Engine Altan’s fan base consists of both grown-ups and children. Upon his arrival, one little fan made a cute drawing for him. Another young admirer presented a card expressing his unconditional love for Ertugrul.

‘’I love you. You are my idol. I have seen Ertugrul a thousand times. When my dad told me that I’m going to meet you, I went crazy and cried in happy tears. I really love you.I can’t even tell you how much I love you.’’

Upon departing to his homeland Turkey, Engin Altan took to Instagram to show his gratitude. ‘’Thank You, Pakistan, see you next time…’’