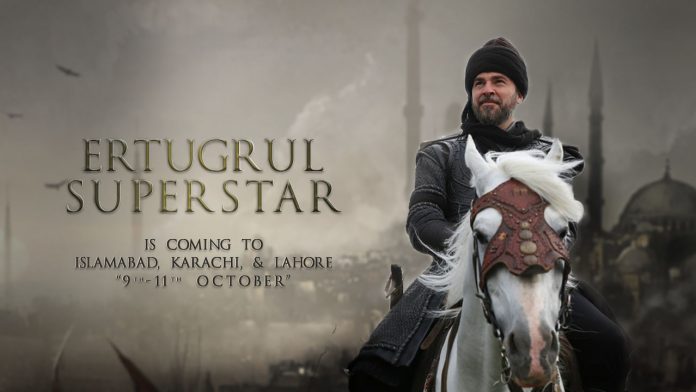 Known for playing the titular role of the historical drama Diliris Ertugrul, Duzyatan is ready to visit the country after virtually meeting with some Pakistani celebrities and special children.

Duzyatan rose to prominence for his performance as Ertugrul Bey in the epic series. He earned iconic status in Pakistan as well as Kashmir after PTV broadcasted the show in Urdu as per PM Imran Khan’s directives. Upon its release, Diliris Ertugrul gained worldwide fame and was often compared with its Western counterpart Game of Thrones (GoT). It is available on Netflix in English subtitles, making it accessible to a wide range of audiences. Diliris Ertugrul went on to break viewership records online and even the Turkish industry estimates that the revenue it generates from the drama will cross $1 billion by 2023.

The show particularly resonates with viewers from the Muslim world including Pakistan. It gained immense popularity during the COVID-19 lockdown and fans expect more from Duzyatan. After a long wait, it seems that they will get the chance to meet their hero in what is already being called the biggest event of the year for Pakistan.

Frontiers World, a management outfit based in London, collaborated with TRT to organize ‘Jashn-e-Ertugrul’, a 3-day tour that will see Duzyatan covering the three major cities of Pakistan. In its press release, Turkish news agency Anadolu quoted Frontiers World and reported that Duzyatan will be visiting Pakistan in October. The tour will take place from 9th-11th October during which Duzyatan will meet fans in-person. He will also participate in a Q&A session on stage, giving fans a rare opportunity to learn more about him and his memorable contributions to the entertainment industry.

Many online websites are already posting about Jashn-e-Ertugrul event details in Karachi, Lahore and Islamabad. More information will be available as the event comes closer, so be sure to visit our website regularly and check for the latest content.

This is not all. According to media reports, the actor has already received his Pakistani visa. Earlier this year, he also signed an agreement with Pakistani housing company Blue World City as its brand ambassador. Notably, his co-star Esra Bilgic who played the female lead of Halime Hatun in the series also signed contracts with three leading Pakistani brands before him.

These are not the only times that Duzyatan has interacted with his Pakistani fans. Recently in August, he visited the Embassy of Pakistan in Turkey to convey his greetings on the 74th Independence Day of Pakistan. The popular actor wished his fans in Urdu in a short video that quickly went viral on the Internet. He said ‘Tamam Ehl-e-Pakistan Ko Jashn-e-Azadi Mubarik’ which translated, means ‘A very happy Independence Day to all the people of Pakistan’. Duzyatan also thanked Pakistani fans for their support and warm response to Diliris Ertugrul.

Bilal Khan Pasha of the Istanbul Turkey Consulate welcomed Duzyatan and shared pictures of his visit on the occasion of Pakistan’s Independence Day. Posting a message on his Twitter account, Pasha also stated that Duzyatan will be visiting Pakistan soon.