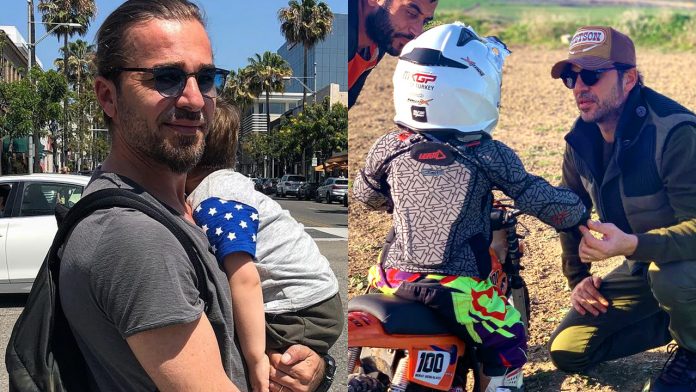 You have heard about Engin Altan Duzyatan, the Diliris Ertugul actor who took the entertainment world by storm with his heroic performance in the Turkish blockbuster. You saw him on the silver screen as Ertugrul Ghazi, the Muslim leader whose struggles resulted in the establishment of the famous Ottoman Empire. You are also waiting to see him appear in the upcoming historical drama Barbaros as either Hayrettin Pasha, commander of the seas, or his elder brother.

Did you know that he has a 4-year old son by the name of Emir Aras Duzyatan? It turns out that the boy won first prize in a children’s motocross racing event, and his father shared the proud moment on social media.

Turning to Instagram, Duzyatan shared a short video clip of his son riding a small dirt bike, captioned ‘Emir’ along with a trophy and gold medal emoji. The track appears to be in a forest, and Emir is seen wearing a yellow outfit as he drives by. The video, approximately 18 seconds long, quickly began making rounds on social media, and fans cannot help but admire Emir.

Like many doting fathers, Duzyatan shares special moments with his son online. Not long ago, the father and son duo enjoyed kitesurfing during a day out with their family, and the Ertugrul star posted it on his Instagram handle. He captioned the endearing photo ‘Kite surfing with my son’ which grabbed the interest of fans.

Earlier, Duzyatan shared a photo of himself in a black three-piece suit and holding a mask on Instagram.

It appears that the talented celebrity has an active social media presence as he is keen on keeping fans posted about his daily life. Perhaps, we are likely to learn whether he will appear in Diliris Ertugrul’s spin-off Kurulus Osman season 2 through a social media update from the man himself. Kurulus Osman narrates the story of Ertugrul Bey’s son Osman I and how he went on to build the Ottoman Empire. Although the drama focuses on Osman I, the vast popularity of Duzyatan among Muslim audiences will probably earn him a few appearances in some episodes. Till then, keep visiting our website for the latest content on Diliris Ertugrul, Kurulus Osman, and the lives of the talented cast who brought both series to life.

Please feel free to join our forum and participate in insightful discussions with community members. Like you, we live and breathe Diliris Ertugrul, so go ahead and share any thoughts you may have regarding the show or its sequel.