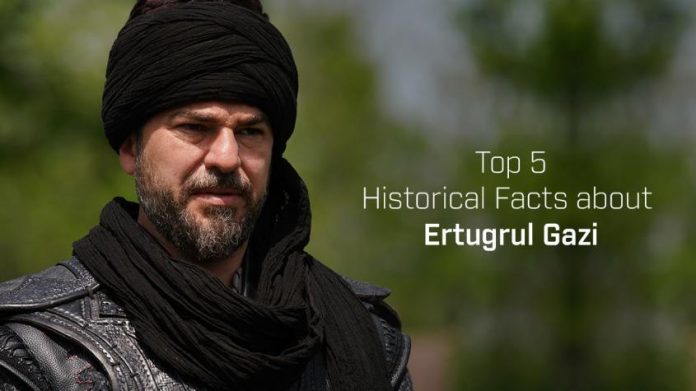 Did you know that the global blockbuster Diliris Ertugrul is based on the life of Ertugrul Gazi? Released on Netflix, the Turkish drama gained immense popularity around the world during the COVID-19 lockdown especially in Asia and the Middle East. Premier Imran Khan praised the series and issued directives for PTV to air it in Urdu. This enabled an even larger percentage of the local audience to understand and appreciate its content.

In Turkish Muslim history, Ertugrul Gazi was a famous historical figure dating back to the 13th century. He was born in 1188 AD and died around 1280 or 1281 AD. A virtuous man and a brave warrior who belonged to the Kayi tribe of Oghuz Turks, he conquered numerous lands in the name of Allah. He was the son of Suleyman Shah and the father of Osman I, the founder of the legendary Ottoman Empire. An impressive military strategist, He fought key battles against his adversaries, including the Byzantines and Mongols. His strong leadership and successful campaigns served as the basis for the Ottoman Empire which his son Osman I founded.

It is not surprising that ‘Ertugrul real name’ are common search terms on the Internet as fans of the television series want to know more about their hero. Experts often refer to Ertugrul as Ghazi in their research and studies. Ghazi, or Gazi, is an Arabic word that means ‘to strive for’ and it is similar to Mujahid meaning ‘one who struggles’. This is an accurate representation of the valiant and determined Ertugrul who championed the cause of Islam. His full name is Ertugrul bin Suleyman Shah, although some sources refer to him as Ertugrul bin Gunduz Alp.

Osman I is the most well-known son of Ertugrul Ghazi. Kulurus Osman, the equally popular sequel to Diliris Ertugrul, is based on his life and contributions to the Ottman Empire. Aged 23, he succeeded his father as the leader of the Oghuz Turks in the Kayi tribe and his efforts led to the foundation of the Ottoman Empire.

According to historians, Ertugrul had two more sons, namely Saru Batu (Savci) Bey and Gunduz Bey, while some sources claim that there were four. This is due to the names Saru Batu and Savci which some experts combine as one while others do not. There are even two graves at Savci Bey’s mausoleum. The first is marked as Saru Batu while the other references Savci, hence leading to confusion. However, Ottoman tradition does not provide any evidence of this, so it is likely that Saru Batu’s title was Savci Bey. This was the title of a person who served as an administrator or diplomat of a tribe. Saru Batu was martyred during the Battle of Dominic in 1287 before his younger brother Osman I founded the Ottoman Empire. Interestingly, he is considered as the most ‘mysterious’ of Ertugrul’s sons.

Not much is known about Gunduz Alp, the third and eldest son of Ertugrul Ghazi. In Kulurus Osman, he is shown to be extremely protective towards Osman I.

Diliris Ertugrul costumes and collectibles are very popular among fans especially in Pakistan. There are Ertugrul themed events such as weddings and birthdays where people celebrate Kayi tribe style. In addition to Turgut Alp’s axe, people often search for Ertugrul sword online where they can compare the best deals and prices. This medieval sword is typically available in stainless steel and some vendors provide the option to engrave your name or preferred text on it. You can even find premium quality Ertugrul swords with the symbol of the Kayi tribe or deliver personalized ones to your family and friends in special gift boxes.

Also, you will come across other accessories like Ertugrul dress, caps and daggers, Kayi outfits, t-shirts, Halime Hatun traditional caps, Kurulus Osman swords, etc. There is a wide selection for both children and adults. Interestingly, you can find the sword of Osman I in the Imperial Treasury section of the Topkapi Palace at Fatih, Istanbul.

The term ‘Kayi’ means ‘powerful’, and according to users from India and New Zealand, it means ‘chosen ones’ or ‘blessed’. According to Ottoman accounts, Osman I was a descendent of the Kayi tribe. If we study the early history of the Turks, we can verify the authenticity of this claim. After the death of his grandfather Suleyman Shah, Ertugrul Bey, and his uncle Dundar, Osman I migrated to Sogut with around 400 members of the Kayi tribe.

Fans are interested in the origin of the Kayi flag which they frequently refer to as the Ertugrul flag especially when searching for information on the Internet. If you watch the series, the Kayi flag is blue and bears the symbol IYI. It is available as an art print, t-shirt, phone case, mask, and wall decor flag at online stores as vendors think of creative ways to market it to customers. You can also find Ertugrul rings with the Kayi tribe’s symbol engraved on them, and all the designs are inspired by the series!