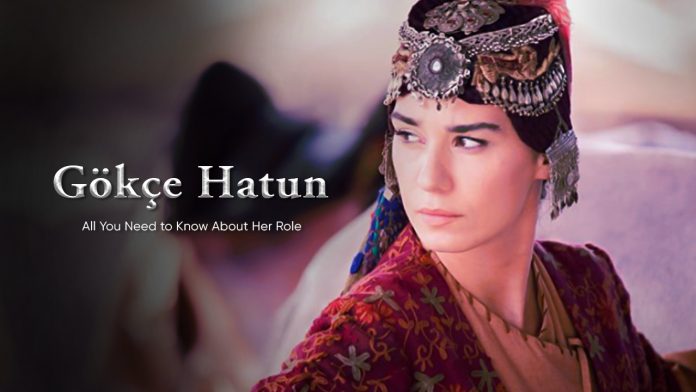 When we discuss anything about the famous Turkish series, Dirilis Ertugrul, the majority of us talk about the male characters in the likes of Ertugrul Gazi, Bamsi Beyrek, Turgut Alp, and others. But we can not leave the Kayi women aside. Just like these men, the women of the Kayi family play an important role in the establishment of the tribe and the well being and prosperity of their people. Hayme Hatun, the mother of the whole tribe along with her daughters-in-law, Halime Sultan (wife of Ertugrul Bey), and Selcan Hatun (wife of Gundogdu Bey) have carried the tribe women on their backs and supported them firmly throughout the seasons.

These three women are widely discussed among the fans but let us not miss out on the character of Gökçe Hatun who is brilliantly portrayed in a mixed role of an antagonist as well as a protagonist in the first two seasons. In this article, we will discuss Gökçe Hatun’s history and who plays the character in the season.

No one really knows about Gökçe Hatun’s real history and story but we know the fact that the season of Dirilis Ertugrul, showed the character in an excellent manner. Who plays Gökçe Hatun in the series? The character was brilliantly played by Burcu Kıratlı.

Gökçe Hatun was the younger sister of Selcan Hatun. Both the sisters were the daughters of Alptekin Bey, who was the blood brother of Kayi Leader, Suleman Shah. Alptekin Bey does not have a major role and was said to have been killed in the back story by Suleman Shah for betraying his trust. He only appears in the dreams of Selcan Hatun, antagonizing her to take his revenge on the Kayi Family. In the whole of season 1, we can see both the sisters playing the role of antagonists, seeking to get their revenge on the leader’s family. Both of them were adopted by Suleman Shah and Hayme Hatun as their own daughters but they took the advantage of this situation to ruin the relationship between the family from inside.

Selcan Hatun was married to Gondugdu Bey (the first son of Suleman Shah) and because of that, she forced her sister Gökçe to marry Ertugrul Bey. Gökçe herself was in love with Ertugrul but was shy to express her feelings. She hid under her sister’s wings who kept manipulating her to do mischievous activities. Ertugrul on the other hand considered Gökçe Hatun as his sister and did not want to marry her when she finally managed to express her feelings to him.

The relationship between the sisters and the rest of the family gets worse when Ertugrul brings an unknown woman to the tribe but we know her as Halime Sultan. Upon seeing Ertugrul’s affection for the lady, Gökçe Hatun develops jealousy for the couple and starts envying them. What her elder sister was doing, she developed the same evil habits. Halime Sultan was welcomed very warmly by the Kayi Family but the sisters wanted her to go away. They did everything they could to demoralize the character of Halime so that the Kayi people could shun and banish her. But Ertugrul had her back and with the love he carried for her, he did not let anything bad happen.

Throughout the first season, we see a rift between these characters. Ertugrul ended up marrying Halime Sultan was a salt rub to wounds of Gökçe Hatun. Although she happily accepted the situation, she could never forget Ertugrul and always thought about him. Towards the season’s end, she was badly injured and also lost her motherhood. Gökçe had a very sorrowful life in the Kayi Tribe. Her life changed around when the second season began. Still holding a grudge for Halime Sultan and her sister Selcan Hatun, who changed around and became a good noblewoman and her love for Ertugrul, she met a man in the Dodurga Tribe. The man was Dodurga Bey himself and the son of Korkut Bey (Hayme Hatun’s brother), Tugtekin Bey.

Who married Gökçe Hatun? Tugtekin Bey was Gökçe Hatun’s husband. Upon seeing Gökçe Hatun, he fell in love with her. They both had their ups and downs in the season and the antagonists of this season took advantage of this to manipulate the Kayis. Gökçe Hatun at first infuriated Tugtekin Bey by bringing up Ertugrul every time he approached her to express his feelings. But when things settled between the two they ended up marrying each other. Gökçe Hatun tied a knot with Tugtekin to tease her sister because Selcan Hatun had personal problems with the Dodurga tribe’s women. Tugtekin on the other hand married her because of his love for her not knowing what she was up to.

Also, Gökçe Hatun kept away the fact from Tugtekin, that she could not have a baby as she lost her motherhood in the first season. Does Gökçe have a baby in Ertugrul Season? This question is often asked and the answer is no, she can not have a child. Tugtekin learns this from his stepmother (the main female antagonist of season 2) and gets more furious at Gökçe on why she did not tell him before. However, with time, things settled and their relationship got better and better after Tugtekin learned that her stepmother was the real mastermind of all the evil in their tent.

Gökçe Hatun was always the weak link in the Kayi Family. In season 1 her sister used her as a pawn to gain her influence in the tribe. In the second season, she herself went into the lion’s den by siding with the villains just to annoy her sister, and just like that the lion caught and killed her. Noyan, the fierce Mongol warrior and leader, was looking for a way to demoralize the Kayi family as they were thriving after defeating the inner wars against the two Turkish tribes. He learned that Gökçe Hatun is the weakest among them and found a way to trap her. She was kidnapped by Noyan’s men and was taken away to lure Tugtekin out. Upon learning that his wife was kidnapped, Tugtekin set for a charge after Noyan with his men.

Leading the charge, Tugtekin rushed towards the trap leaving his men behind, and was caught by Noyan. The Fiery man he called Tugtekin could not save his wife and was severely injured by Noyan whereas Gökçe Hatun was killed in front of her husband. Tugtekin’s men reached the place but were late to save their Bey and Hatun. They brought the dead body of Gökçe Hatun back to the tribe along with almost dead, Tugtekin. The tribe’s celebration of Nawroze turned into deep sorrow and was weakened. Gökçe Hatun’s death occurred in Season 2 episode 92. Gökçe’s character ended in a sad way along with her husband Tugtekin who later succumbed to his wounds and was martyred. Gökçe Hatun’s grave is not known by anyone but in the season she was buried in the area, where the tribe was settled.