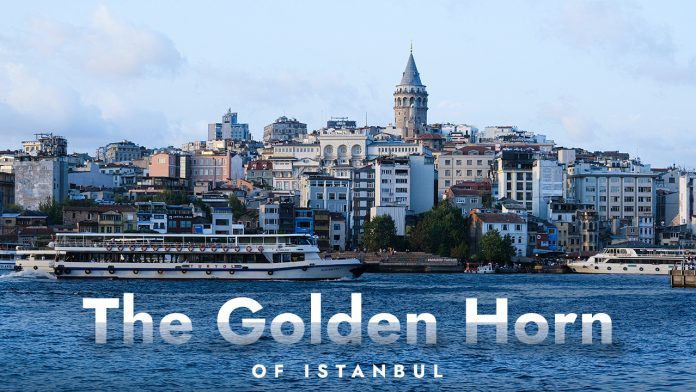 The Golden Horn or Haliç in Turkish ((hah-LEECH, from Arabic) is a horn-shaped inlet that drains two rivers. It is located in Bosphorus on the European side of Istanbul. It is considered the largest natural harbor in the world two streams are running at a time and that separated the European shore of Istanbul into two. Galata Bridge is the best place to observe the beauty of the Golden Horn Istanbul and activities happening over there. If you want a 360-degree view of the entire place, then you should prefer Pierre Loti Cafe or Topkapi Palace.

This natural harbor is today surrounded by promenades, parks, and ancient sites. The name Golden Horn is due to the gold color of the water that appears when the sun shines on the harbor and reflects.  It used to be the trading harbor during the Byzantine period and a properly developed residential area. A huge chain blocked the entrance of the harbour due to which the unwanted ships could not enter.

At the time of the Ottoman, the Istanbul rivers (harbor) was inhabited by Jewish immigrants who came there from Spain. With the passage of time, people from all over the world, the Greeks, Americans, Turks, and Gypsies started living at the shores of the harbor. It is from the Ottoman period that hills and mosques are covered with cemeteries. If you want to enjoy the view to the fullest, Pierre Loti Cafe is the best place to get the relish with traditional Turkish tea or coffee.

The visitors love this place due to the peace and beauty all around. At the end of Golden Horn, there is an Eyup neighborhood that is considered an important site for Muslims who come to visit and pray on the tomb of Eyub El Ensari. As known, Eyub El Ensari died in the 7th century during the Arab siege of Constantinople chain. He was the companion of Prophet Muhammad.

In the 1950’s the population started to explode and there were not any ineffective building laws due to which the Golden Horn started becoming ugly. The terrible odor of industrial waste and city sewage was a serious issue at that time. The situation remained the same for decades. By the 1980s, the cleaning began. The government took initiative to clean up the factories and maintain proper sewage systems all around the Golden Horn.

In some time,  the stores started becoming green and clean with playgrounds, stalls, and shops. Balat and Fener are the old neighbours or Golden Horn. These are all the wooden houses, old synagogues, and Byzantine churches that were settled. Before the 19th century, there was no bridge on the Golden Horn. There were small boats available for people for transportation from one shore to another. These also include some people who use to supply things across the shores. The first Istanbul bridge named as Galata Bridge was built in 1836. Today, it connects Karakoy to Eminonu. The bridge was again built in 1845, then in 1912, and latest built is of 1993. Another bridge is Halic Bridge which is over the Golden Horn. The third bridge is Unkapani also known as Ataturk Bridge. It handles the traffic flow between Saraçhane and Beyoglu.