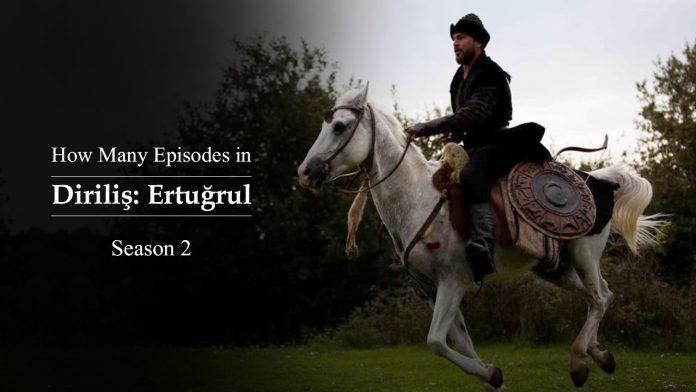 The Turkish TV series, Dirilis Ertugrul came out with a second season back in 2015. The TV series, created by Mehmet Bozdag, succeeded the first season and premiered on the 30th of September 2015. The season aired on the TV screens for almost 9 months and ended on 8th June 2016. With a new story and thrill, the season introduces the most feared Mongols in it. The article will take you through the journey of Kayi Tribe’s new experiences and tells how many episodes in Ertugrul season 2 were aired on screens.

The second season introduces some new faces in the likes of Tuğtekin, Aytolun Hatun, and the rest of the Dodurga people. Some other new faces include Baycu Noyan, Tangut (Noyan’s Right Hand), Sadettin Kopek ( A Selcuk Vizir), Ertugurl’s long-lost elder brother, Sungurtekin Bey, and the tribe doctor, Artuk Bey. The season has 35 episodes as aired on Turkish channels whereas Netflix and PTV stream 103 and 104 episodes respectively on their own mediums.

The season starts with Ertugrul and Halime Sultan racing their horses towards a mountain top. Upon reaching there, Halime brings joy to Ertugrul by telling him that she is with a child. The joy ends in a short time, as the famous couple is interrupted by the fearsome Mongol warriors. Ertugrul gets captured by the enemies and Halime manages to escape and find her tribe. Meanwhile, the tribe itself is persecuted by the Mongols with most of the people burnt alive. Hayme Hatun reaches the Dodurga Tribe with the remaining to seek refuge in her brother, Korkut Bey’s protection. Halime enters the tribe with tears and fear and tells her family about Ertugrul’s kidnapping. The tribe’s sorrow is now grown and they start to worry about the safety of their leader.

Tuğtekin along with Gündoğdu bey, rally their soldiers and set out to find Ertugrul only to get caught in Noyan’s game into believing Ertugrul is dead. The tribe suffers another loss and this time a major one. The tribe starts settling in the new land as the hosts welcome their guests. A new phase of political war and grudges start as there is fierce competition between the two tribes. Ertugrul after facing Noyan’s torment is saved by a wanderer, Geyikli and he hides him in a cave. Geyikli then reunites Ertugrul with his blood brothers, Dogan, Turgut and Abdul Rehman. Ertugrul asks them to keep his secret of not telling the tribe that he is alive.

Tuğtekin plans on becoming the tribe’s new commander but is opposed by the Kayis as they feel that they’ll become inferior to them. All these political ups and downs are faced by both the tribes but then Ertugrul appears to ease Kayis’ pain and sorrow. Dodurga leaders start fearing that they will now become inferior to their sister tribe as Ertugrul will not let them overcome the Kayi’s. Ertugrul challenges Tuğtekin for an election for becoming a commander but Halime makes a mistake by telling Hayme Hatun that Ertugrul can not fight because his hand is injured. Ertugrul becomes angry and leaves the tribe with later on being banished by his own mother.

Ertugrul starts his own journey and expeditions. As becoming a part of the White Beards ( a secret agency), he is tasked with finding new lands for the Turks to live in and is asked to go to the Byzantine borders. Ertugrul along with his blood brothers, leave to explore the land. He has to face the Christian warriors again just like he did in many episodes in Ertugrul’s season 1. After this Ertugrul decides that he will bring his tribe here to settle down permanently. He returns back to the tribe to discuss the matter of migration but sees his people oppressed by the Dodurgas.

Bamsi Alp makes his return in the season as he returns from the training grounds with Ertugrul and Halime’s younger brothers Dundar and Yigit Alp. Aytolun Hatun and her Niece, Goncagul are on their own agenda to dethrone Korkut bey and make Tuğtekin the new leader. They tried many ways to kill him but could not succeed. Selcan Hatun’s jealousy grows as she could not give Gündoğdu a child and has to see her husband marry the enemy’s daughter.

Sadettin Kopek is introduced somewhere in the middle of the series as he brings his own cunning games with him to demolish Ertugrul’s dreams of new land. He allies himself with Noyan to crush the tribe before they can ever start a new peaceful life. He even makes promises with Ertugrul’s own brothers for establishing peace among the tribes if they oppose Ertugul’s demands for migration. Ertugrul had other ideas and he took Selcan and Banu Cicek’s help to expose the wrongdoings of Tuğtekin’s stepmother, Aytolun Hatun, and cousin Goncagul in front of him. Tuğtekin gets shocked to learn that he is being used by the traitors of the tribe and starts supporting Ertugrul’s cause in every manner. They then trap Gumustekin Bey ( Tuğtekin’s uncle) and Ertugrul later beheads him defying Sadettin’s orders. All traitors are killed and Tuğtekin gets together with his wife Gokce Hatun and Gündoğdu makes peace with Selcan Hatun.

Towards the end of the season, Noyan tries everything he can to devastate the tribe’s happiness by kidnapping Gokce Hatun. Tuğtekin is trapped by Noyan as he tries to save his wife but later both are killed by Noyan. This brings back sorrow to the tribe. Later Ertugrul calls in a meeting of the Tribe’s elders and forces a migration. Ertugrul’s season 2 last episode shows all his supporters packing their belongings as they leave the tribe to settle in their new land.

The second season is then succeeded by the third season with a new story. If you want to know how many episodes are there in Ertuğrul’s season 3, then you’ll be glad to know that the season has 30 episodes (Turkish channel) and 90 episodes on both Netflix and PTV.