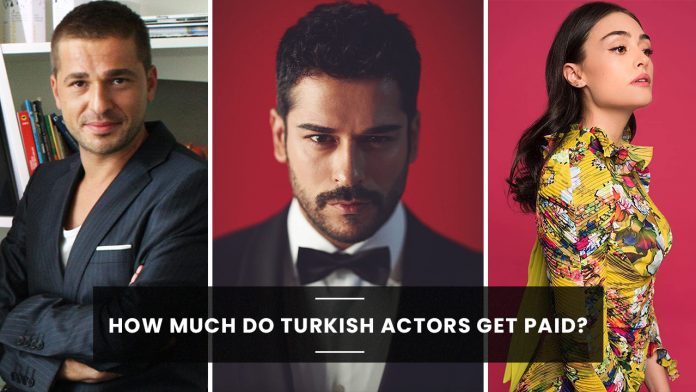 The Turkish film and drama industry is on the rise with new dramas and films coming out simultaneously. Not only it made its footsteps locally, but also managed to grow its roots worldwide. Some of the Turkish stars have also made their appearances in Hollywood Television and Entertainment Industry including Netflix original films and series. Fans are always eager to learn about the lives of their favorite artists and above all how much do these Turkish actors get paid per episode.

We have compiled a list of some of the top-earning stars in Turkey.

We all know about the Turkish series, Dirilis Ertugrul and how it made its name worldwide. The drama portrays the life of a famous Muslim warrior and a leader who laid the foundation of the Ottoman Empire, Ertugrul. The actor playing Ertugrul’s role in the series is Engin Altan Duzyatan. He turned out to be one of the sensations in the industry after successfully playing his character. Not only he gained fame locally but when the drama started streaming on Netflix and later on PTV (Pakistan National Television), the actor became a prominent figure among Muslims all over the world.

He became the most sought-after actor, that fans call him by the name of his character, Ertugrul instead of his real name. Engin Altan Duzyatan’s salary in Ertugrul was around 250,000 Turkish Liras which is almost $30K per episode. The actor’s success in this series has landed him some other projects and one of them is coming out soon, Barbaros.

Fans around the world are always hyped about Esra Biligic, a Turkish actress and model. Co-starring with Engin Altan Duzyatan in Dirilis Ertugrul as Halime Sultan, she has made her name among people globally for playing this iconic role. Esra is said to have earned 100K Liras per episode and appeared in 4 seasons of the popular series. Apart from this, she also appeared in Ramo alongside Murat Yıldırım, playing a lead role.

Winning the hearts of Pakistani people, Esra was approached by many brands for becoming their brand ambassador. She is associated with Jazz, Qmobile and a cricket franchise team, Peshawar Zalmi. Besides that, her social media followers grew enormously after the Ertugrul series was aired internationally and now she has over 6.1 million followers on Instagram.

After a successful production of Dirilis Ertugrul, the producer, Mehmet Bozdag started a new project by the name of Kurulus Osman. Kurulus Osman is a continuation of its predecessor Dirilis Ertugrul, which revolves around the life of the founder of the Ottoman Empire, Osman, the third and last born son of Ertugrul and Halime Sultan. In the series, the character is played by Burak Ozcivit who has also earned a global fan following. One of the most loved actors, Burak is earning a huge sum for acting in the series which is around 300K Turkish Liras per episode. The actor has signed a five years contract with Mehmet Bozdag and is required to give his best physical efforts to portray the character brilliantly, thus the high pay is justified.

Cagatay Ulusoy, who is the highest-paid Turkish actor, earned a big amount for playing the lead role in the Netflix Original Series, Hakan Muhafiz aka The Protector. The reports say that the actor earned a sum of almost $3 million for four seasons of the series. Although this may look like a huge sum for Turkish actors, when it comes to Netflix, this salary is a modest one.

Not appearing on screens for many years, Murat Yıldırım made his return to Ramo along with Ertugrul’s famous actress Esra Biligic. The series started in 2020 and it is said that the actor earned around 90K Turkish Liras per one episode.

Engin Akyurek earned a huge sum for working in the series, “The Ambassador’s Daughter.” The journalists report his salary to be 200K Turkish Liras but this was just a gimmick to draw attention towards the show. Although the actor’s recent dramas were not famous among Turkish viewers, he remains one of the most famous artists outside of the country. The amount he earned through this drama is justified because the producers believed that it could be sold successfully.

Neslihan Atagul co-starred with Engin Akyurek in the drama, “The Ambassador’s Daughter.” Playing a lead role alongside her male counterpart she earned a hefty amount, which is around 65K Turkish Liras per episode. The actress left the role earlier in January 2021 due to Leaky gut syndrome and was later replaced by Tuba Büyüküstün in the series.