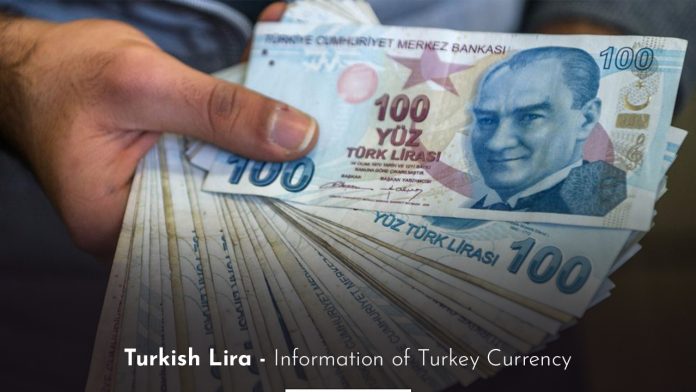 The currency of Turkey is the lira. It was introduced as the official currency of Turkey in 1844. The currency has suffered many depreciations in history. For instance, the Guinness Book of Records mentioned the lira as one of the least valued currencies of the world two times. After it was introduced, lira replaced Kurus that was changing its forms at that time, and thus became the subdivision of lira. The inflation rates of Ottomans are high as compared to other developing countries. However, it has never suffered hyperinflation yet.

Lira has experienced many transformations and valuation processes in history. From 1844 to 1881, the currency was based on two systems, that was pure silver and pure gold. In pure gold, the lira was worth 6.61519 grams and 99.8292 grams of pure silver. However, with the passage of time, the valuation changed and till 1914, only the gold standard was adopted. Even after this, the lira went through many transformations, especially during the First World War, until 1920, Turkey started losing the value of its currency and abandoned the gold standard; the only silver standard was used.

The new Turkish lira was introduced on 1st January 2005. The Grand National Assembly of Turkey passed the law in which they proposed to remove the six zeroes from the currency. The law was passed in 2003 and was applied in 2005. It replaced the previous lira rate i.e. now 1 new lira = 1.000.000 old lira. In the past few years, the Turkish currency has stabilized. It has gained value now against Euros and US Dollars. However, if you travel to Turkey, it is always better not to change your money to Turkish lira as they would have less worth. The reason is that the Turkish currency is always in circulation, the old Turkish liras used to evolve even by the end of 2005. Therefore, when you change the lira, make sure they are not changed based on the old ones.

If you are traveling to Turkey, you would need to exchange the money in Turkish liras. The exchange rates are far better in Turkey and at international airports. You would be able to get exchange facilities at airports as well. Most often, the cash is exchanged in Turkish liras without any additional charges or commission by the offices. The hotels and banks also provide this facility. If you want to exchange the cheques, it could be done through banks.

ATMs are installed in most areas that help you get cash with your debit and credit cards. Currency exchange is no more an issue, you can exchange it from your country as well. However, it better to get it from Turkey exchange offices and airports as the exchange rate would be better and you will get money without any additional tax.

If you are traveling from Pakistan to Turkey, you would need to exchange the Turkey currency in Pakistan. Wise.com allows you to convert the Turkish currency rate In Pkr. Currently, 1 Turkish lira is equal to 18.14 Pakistani Rupee.

When it comes to Turkey’s currency to USD, 11 Turkish lira is equal to 0.11 US Dollar. The exchange rate of Turkey is published in the newspapers of Turkey. If you are planning to exchange the currency or are doing any major purchase in Turkey, make sure to keep the transaction receipts with you so that you do not face any difficulty by customs and prove to them that this currency is exchanged legally.