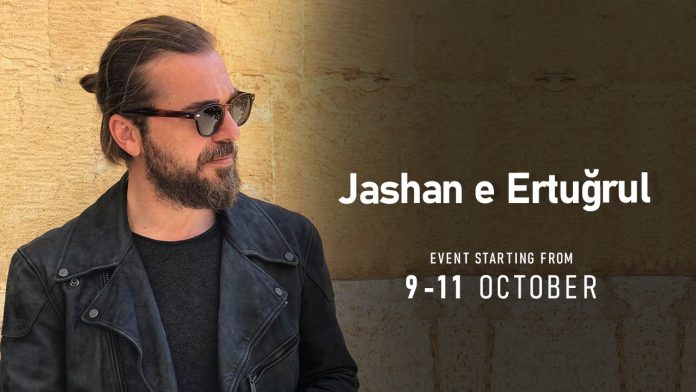 Only one day to go! Jashn e Ertugrul takes place tomorrow, October 9th, as Engin Altan Duzyatan aka Ertugrul Bey is scheduled to visit Pakistan on a 3-day tour.

He is the star of Diliris Ertugrul, a brand ambassador of the Pakistani housing company Blue World City, and one of the most bankable Turkish actors of this generation.

We all know and admire him as the man who brought the silver screen to life with his heroic performance in Diliris Ertugrul. Duzyatan largely contributes to the worldwide fame of the Turkish series, and his talent and charming personality have captured the hearts of Pakistanis.

The producers of Diliris Ertugrul could not have chosen a better person to represent the 13th-century Oghuz warrior Ertugrul Ghazi. He is best known as the leader of the nomadic Kayi tribe and father of Osman I who established the mighty Ottoman Empire. The big-budget drama earned iconic status and a huge fan following in Pakistan during the COVID-19 lockdown. Everyone flocked to Netflix and YouTube to watch the series and even PM Imran Khan had PTV broadcast it in Urdu for maximum viewership. Within days of its first telecast, Duzyatan’s popularity skyrocketed, and people celebrated him all over Pakistan.

Apart from signing the contract with Blue World City, Duzyatan virtually met special children through the Make-A-Wish foundation and wished fans on the occasion of Pakistan’s 74th Independence Day. Not long ago, London-based Frontiers World partnered with TRT to organize his much-awaited trip to Pakistan. Youth Empowerment Society and Skillerz International in Pakistan will be managing the event on behalf of Frontiers World. The 3-day ticketed Jashn-E-Ertugrul tour will see Duzyatan visiting Lahore, Karachi, and Islamabad, meeting fans in person, and answering audience questions on stage. Jashn-e-Ertugrul event details are the buzzwords these days, and you can find more information on social media platforms like Facebook.

Earlier, Duzyatan stated that he has always been a fan of Pakistan and would gladly visit the country for work. He even revealed that he compared the people of the Ertugrul time period to the people of the modern world. According to his views, the former stands for simplicity, innocence, and pure-heartedness, while the latter is pretentious. Present-day humans can learn a lot from the sincerity and truthfulness of the Oghuz Turks in Diliris Ertugrul.

When talking about the appreciation he has been receiving from Pakistani fans, Duzyatan commented that he has been hearing about Pakistan’s and Turkey’s friendship since childhood. Thinking about this makes him emotional, and if content creators offer him a role here, he would definitely accept it. Interviewers also asked Duzyatan if he had any idea about Diliris Ertugrul’s unprecedented popularity in Pakistan when he first took up the project. The star responded that he considered it his best work and hoped for its success. He also praised the drama’s presentation that enabled all the actors and actresses to absorb it without any difficulty.

Jashn-e-Ertugrul is sure to strengthen Turkey and Pakistan’s friendship and pave the way to further collaborations between the two countries. In fact, other cast members including Cengiz Coskun, Nurettin Sonmez, Didem Balcin, and Burcu Kiratli have recently worked with prominent Pakistani names like JDot, Maria B, and designer Ali Xeeshan. Esra Bilgic, famous for her role as Halime Hatun in Diliris Ertugrul, even emerged as the brand ambassador of Jazz and QMobile. Her latest social media post hints at a partnership with Pakistani clothing giant Khaadi.