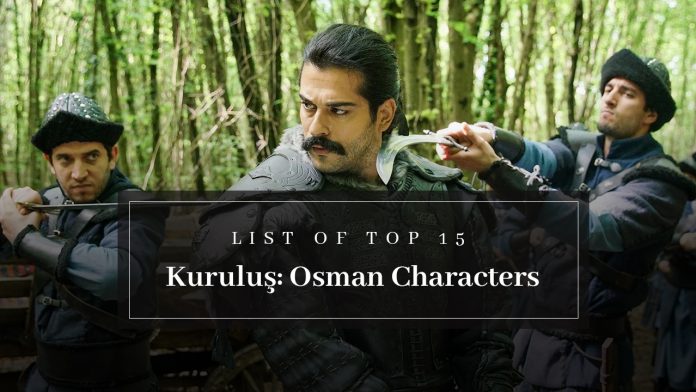 Kuruluş: Osman is a Turkish historical drama television series that came after Dirilis Ertugrul. The series is created by Mehmet Bozdağ. Burak Özçivit plays the main role of Osman who is the son of Ertugrul in this series. The tv series focuses on the life of Osman and the challenges he faced as the founder of the Ottoman Empire. The composition of the series with the historic views and living style made it a super hit TV series that is praised in all Muslim countries.

This article gives a list of Kurulus Osman season 2 cast names with pictures.

Burak Özçivit plays the role of main character Osman Bey, Kurulus Osman top cast in the season, he is the youngest son of Ertuğrul Gazi and Halime Sultan. Osman Bey has two wives in this season, Bala Hatun and Malhun Hatun. He treated Selcan Hatun as his mother as Halime Sultan died in the last season. He follows the footsteps of his father throughout and travels on the path that seems more suitable to him. He is elected as the Bey of Kayi Tribe in season 2.

Özge Törer plays the role of Bala Hatun as the first wife of Osman Bey. She is the daughter of Şeyh Edebali and Ulduz Hatun. In this season, she is a beautiful painter. She is loyal to all her close ones such as her father, husband, Selcan Hatun, and Ahi brotherhood. She is a patient and calm person but becomes weak due to heartbreak. Mongol stabbed her in season one and due to which she could not produce a baby and for that fact she is teased all the time. She becomes the head of Hatun as Hanim.

Yıldız Çağrı Atiksoy plays the role of Malhun Hatun. She is the daughter of Ömer Bey and the second wife of Osman Bey. She is also the Hanim of Bayındır tribe that consists of 1000 people who settle in Bithynia. She is a fighter and has skills in archery. She used to have a tense relationship with Bala Hatun as she became arrogant due to the power of her father.

Yiğit Uçan is one of the kurulus osman actors known as Boran Alp. He is the best friend of Osman Bey and the husband of Gonca Hatun. He is a talented singer and bard. His skills of using bow and arrow can be seen in the season. He used to be with Osman Bey throughout his tough journeys and situations.

Burak Çelik plays the role of Göktuğ. He is the long-lost brother of Konur Alp and the right-hand man of Balgay. His tribe got raided by the Mongols and they washed his brain. He reverts back to Islam after seeing the letter from Emperor. He became the chief of Alp of the Kayi Tribe. He reunites with Osman and helps Bala Hatun to escape.

Ragıp Savaş plays the role of Dundar and he is the youngest brother of Ertugrul. He is the uncle of Osman Bey and can be swayed by others very easily. He also became a substitute for Ertugrul when he went on a mission to Konya. He gets manipulated by his wives very easily and makes some mistakes. However, he realizes all his working steps and begs for forgiveness. Erturgul punished him.

Savcı plays the role of one of the Kurulus Osman season 2 cast as Kanbolat Görkem Arslan and he is the second son of Ertuğrul Gazi and Halime Sultan. He named his son Ertugrul. He goes to Crimea in season 1. He is an alim and a scholarly person. He used to have very tense relations with Osman as he was misled by his uncle Dundar.

Eren Vurdem plays the role of Konur in season 1. He is one of the most trusted Beys of Osman and has the skill to fight battles using daggers, Mongols raided his tribe and separated him from his brother Göktug.

Alma Terzić is playing the role of Prensesi Sofia in starring season 1. She is the lover of Kalanoz and the princess of Kulucahisar. She cheats on her husband and kills him. He used to be a merciless princess and helps the father of Seyh Edabali in evil plans. Osman kills her while conquering Kulucahisar.

Erkan Avcı plays the role of Nikola. He is the best friend of Komutan Flatyos and a great commander of the Byzantine Empire. He is an atheist and came to İnegöl to kill Osman and the Turks. He is skilled in pottery and making sculptures. He doesn’t want the Kayi Tribe to live in peace and tries to capture Osman.

Nurettin Sönmez plays the role of Bamsı and a loyal friend of Ertuğrul Gazi. He is also the mentor of Osman Bey and guides him throughout his journey. He loves his wife and children and mourned for a very long time when they died. Ertugrul Gazi declared Dundar as acting Bey and Bamsi accepted this decision as it was the order of his Bey. He supports Osman and protects some relics to hand over them to Osman.

Didem Balçın plays the role of Selcan Hatun. She is the eldest daughter of Alptekin Bey and the older sister of Gökçe Hatun. After the death of Halime Sultan, she took care of Osman and Gündüz. She became the Hanım of the Kayı tribe and the counselor and protector of the women of Kayi.

Emre Basalak played the role of Gündüz Bey and is the eldest son of Ertuğrul Gazi and Halime Sultan. He is very protective of Osman Bey and helps him throughout and prevents him from following the path that does not seem right to him. He became the in-charge of Kulucahisar castle and played his role to stop the conflict between his brothers. After the death of Ertuğrul, he supports Osman to become the Bey of the tribe.

Emel Dede plays the role of Gonca Hatun. She is the wife of Boran Alp. She becomes a Kayı Hatun and helps Dündar Bey in running Söğüt. She treats Selcan Hatun as a mother. She is a fighter in the season due to which many times she got wounded while fighting against enemies.

Buse Arslan plays the role of Aygül. She is the daughter of Dündar Bey and Zöhre Hatun. She treats Selcan Hatun as her mother and loves Osman Bey. His husband killed her brother, she became mentally ill and Selcan Hatun helped her and did her mentoring. She supported Osman in becoming the Bey of the tribe and was appointed as the head of the Bacıyân-ı Rûm by Osman.