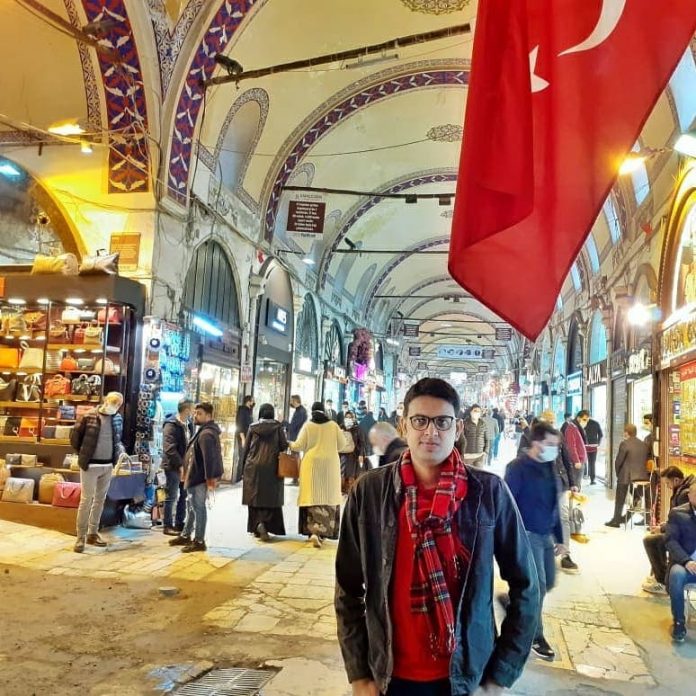 This year Turkey was on my bucket list and I thought that it’s the best time to get my long-awaited tour finally.

These pictures of the bridges were captured when my ship was passing from the Bosphorus strait. The first bridge which I crossed was the ‘Yavuz Sultan Selim Bridge’.While transiting from ‘Black Sea’ to the ‘Sea of Marmara’ the second bridge that I passed from was ‘Fatih Sultan Mehmet Bridge’.This bridge is named as ’15 July Martyrs Bridge’ in the memory of the martyrs who gave their lives while fighting against the army trying to overthrow the government of Recep Tayyip Erdogan.

Ibis hotel, Istanbul, one of the 2043 Ibis hotels all around the world. This is where our stay was arranged.

During our stay, we used to have our meals at Nov’ist restaurant.

A Visit to Hagia Sophia

Hagia Sophia (Aya Sofia) is by far the most famous historical structure of Istanbul. Basically, Hagia Sophia used to be a church during the times when Constantinople (Istanbul) was the capital of the Byzantine Empire (Eastern Roman Empire). Its construction was completed in 537 AD, during the reign of Byzantine Emperor Justinian 1. It was the largest Cathedral of the empire.

In 1453, after the fall of Constantinople to the Ottoman empire, it was converted into a mosque.

In 1935, the secular Turkish republic once again converted it but this time into a museum. In 2020 it was converted into a mosque by Recep Tayyip Erdogan. I was lucky enough to offer Jumma Prayer in this landmark.

Sultan Ahmet Mosque also known as Blue Mosque was constructed in the rule of Sultan Ahmet 1 in 1616.

It boasts the splendor of Turkish architecture. It was the first mosque ever built with six minarets. It is located near Hagia Sophia just across the Sultanahmet square.

It is the most famous market among tourists. It has many shops of jewelry, clothing, shoes, watches, spice, and dessert, etc.

Felt greatly honored to visit the Eyup Sultan Mosque and complex. This Mosque was built along with the shrine in the honor of Hazrat Abu Ayub Ansari (R.A) (one of the companions of the Prophet (SAW)) who died (not martyred) during the conquest of Constantinople (Istanbul) during the reign of the Umayyad caliphate.

It’s worth mentioning over here that Hazrat Abu Ayub Ansari (R.A) was honored to arrange for Hazrat Muhammad (SAW) to stay in his house after the migration (Hijrat-e-Medina) before the construction of Prophet’s (SAW) own house.

Although most of the Turkish dishes are not in accordance with the taste buds of Pakistanis but still there are few dishes that Pakistanis should definitely be trying. My favorite Turkish dish is a Turkish pizza. It is quite rich, unique, and scrumptious to taste. When one comes to Turkey and does not try Turkish Delights then it is quite unfair! Turkish delights are quite rich in their sweetness.

Baklava is the most famous and most delicious Turkish sweet. Lokum is another Turkish delight and is often taken as presents by the tourists as it remains fresh for about three months. Last but not least is kunafa. Kunafa is a typical middle eastern dish that varies in ingredients from country to country. Kunafa is also a must-try dessert.

Leaving Turkey with so many memories that I will never forget. Saying bye to Turkey at Istanbul airport until I come again!