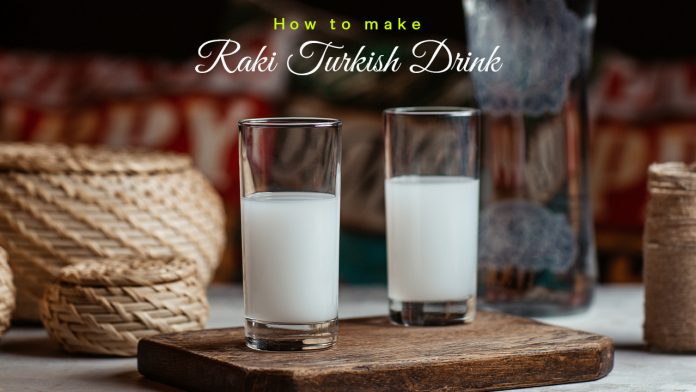 Turkish people have a drink which they proudly own. Known as raki, it has got the title of national beverage of Turkey. It’s a festive drink which is used commonly for celebrations. Whether it’s branded or prepared at home, it has its own charm!

Locally called ‘’Lion’s drink’’, raki has strong properties. Symbolically represents strength and braveness. Main components are aniseeds, grapes and rest is open to flavours. It’s always recommended to soften it by adding water. Otherwise, be ready to bear consequences. Raki is served along with cheese, fruits and meys.

Raki was a famous drink of royals. There was a bar in Ottoman empire known as ‘’Meyhana’’ derived from Persian word ‘’Meykhaneh’’ meaning drinking house. From there this spread to the whole Turkey and there are many historical places which serve raki in traditional ways.

Use of Aniseeds in Making Raki

Raki was originally made with the pulpy residue of grapes. Leftover grapes were collected for its preparation. Later, in the 19th century, grape production was not enough to cater to the needs of Turks. So, most people used imported wine for its formation and aniseeds were introduced.

During the war, grapes were rare to find. Due to unstable situations. Locals even at that time did not refuse to have raki drinks. Instead of grapes, dried fruits such as plums, berries and figs were used to prepare raki drinks.

Raki Drink was Under Ban

A time came when raki was under headlines. A legal ban was imposed. Formation and selling were not allowed. But who can stop these Turkish lions to drink their favorite booze? The answer is none! Butchers used their places to grind grapes. Laundry washers offered their area for drying up fruits aka fermentation. Big canes used in the oil industry were used for the distillation phase. However, this formation process of raki was very injurious to health.

President Erdogan is famous for non smoking and drinking. He was badly criticized by the media when he put a ban on drinking. On which he responded as ‘’Ayran , a non-alcoholic drink mainly prepared with yogurt is the national drink of Turkey not this alcoholic drink’’.

How to Make Raki Drink at Home

Put aniseed in alcohol. Let it settle for two days at a room temperature.

Take a boiler. Thoroughly clean it. Add some marbles at the bottom.

Place small baskets having filtering holes in it.

Add aniseeds in the baskets.

Put the boiler on. Once it’s heated. Collect the aniseed extract.

Put this extract into glass jars.

Aerate this liquid for a day and taste the next day.

How to take Raki

Raki is always taken with chilled water or ice cubes. When water is added, it becomes milky white in texture. Raki is a celebratory drink. People gather around a table and drink by taking sips of it. Locally it’s called ‘’Cilingir Sofrasi’’ meaning locksmith’s table. It’s said that when people sit together and drink raki, their secrets come out easily.

Just like traditional Turkish cuisine, raki gathering also requires some ethics. Firstly, drink only if you can handle yourself. The table usually gathers around 7-8 PM. There is a starting time of Raki but there is no limit to its closing time. There are following things one needs to keep in mind,

Stay tuned for more amazing Turkish traditional drinks and travel stories. Let us know in the comments what you want to see next here!