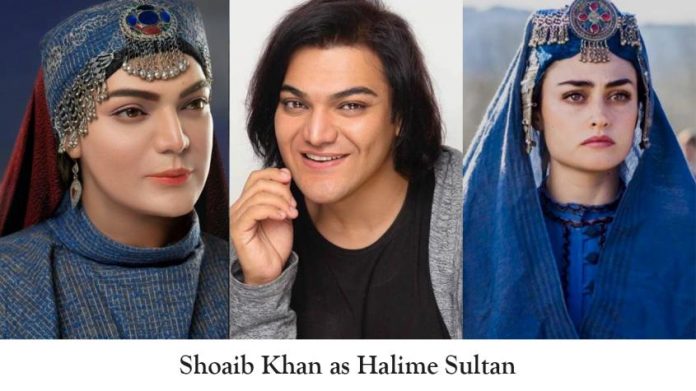 Turkish actress Esra Bilgic, known for her role as Halima in Ertugrul, won the hearts of Pakistanis with her talent and mesmerizing beauty. Fans have been paying tribute to her in their own ways, and even the famous Pakistani makeup artist Shoaib Khan has joined the bandwagon.

A Work Of Art

He worked his magic and transformed himself into the Seljuk princess Halime Hatun using his fine makeup skills. He completed the famous look of Esra Bilgic by wearing the same outfit that she did in the drama. Shoaib Khan then posted his Halime Hatun avatar on his official Instagram account, along with a still of the Turkish actress in her trademark dress and his everyday look. The makeup artist’s caption was full of praise for Halime Sultan’s simplicity, strength, gentleness, and beauty. He pointed out other qualities in Halime Ertugrul, including her compassionate nature, her discipline, and her rational attitude. He ended his post by mentioning that he pays tribute to the inspirational character of Halime Hatun.

This is not the first time that Shoaib Khan has impressed us with his creative contributions. Not long ago, he amazed Pakistani fans by transforming himself into familiar characters who appeared on the silver screen, including Noor Jehan, celebrities Joaquin Phoenix’s Joker, and Angelina Jolie’s Maleficent.

How Does He Do It?

What is the secret to Shoaib Khan’s unbelievable work? As an expert in his craft, he only uses cosmetics to take his portrayals to a whole new level. If you look at his Instagram post of Halime Hatun’s avatar, you will notice that he did not skip the tiniest details. From the rosy lips to the flawless, glowing skin, Shoaib Khan has pulled off the look perfectly, and we cannot think of anyone who could have done it better than him.

Why Halime Hatun From Resurrection Ertugrul?

It comes as no surprise that Shoaib Khan chose Halime Hatun for this particular project. Diliris Ertgrul recently earned a place in the Guinness Book of World Records as the best dramatic work in the history of global drama. The series became immensely popular in Pakistan during the COVID-19 lockdown as viewers took to Netflix and binge-watched the show. Even Prime Minister Imran Khan directed PTV to dub the show in Urdu so that it could reach a larger local audience. Following the success of Diliris Ertugrul, the creators presented Kurulus Osman, an equally popular spin-off that narrates the story and conquests of Osman Bey, Ertugrul’s son.

What’s next for us? We can surely expect more innovative ideas from fans of Diliris Ertugrul, so keep visiting our website for the latest content!