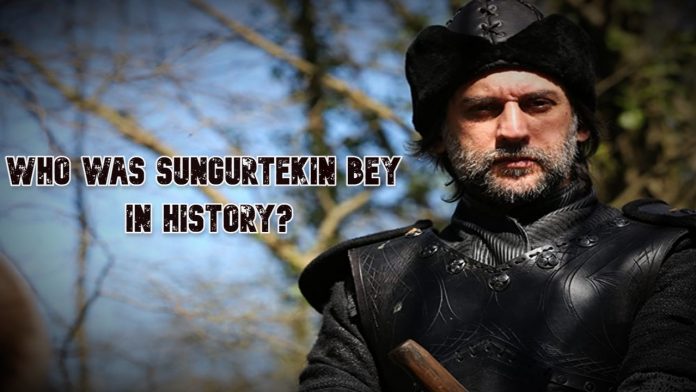 The role of the Seljuk spy and Kayi’s son, Sungurtekin Bey is played by a famous and well known Turkish Actor, Sezgin Erdemir. Sezgin managed the role well and was part of the cast for the second half of season 2 and then made his return in the fourth season of the series. He also made a cameo in Kurulus Osman’s first season helping Osman in his fight against the enemies.

Sungurtekin Bey was the lost son of the Kayi family who was considered to be dead by the tribe. During the whole first season Dirilis Ertugrul, we only hear the name of the character from Hayme Hatun who was always mourning for her son. Although she believed that one day she would be reunited with Sungurtekin Bey, no one was sure what happened to him. Some believed that during the persecution of the Mongol army on the Turkish tribes, Sungurtekin might have got killed by the enemies and some believed that he just escaped the persecution and might be in hiding. Hayme Hatun at many moments requested her other sons to find Sungur (Sungurtekin Bey’s real name) but they believed they had lost their brother in the war with Mongols.

The second season marks the character’s entry into the series. In episode number 41, Halime Sultan and Wild Demir were traveling to fulfill a mission given by Ertugrul for delivering a map to the Royal Seljuk Palace. They were being followed by Noyan’s (a fierce Mongol commander) men led by Tangut (Noyan’s trusted lieutenant) on the journey. Time was not on their side and they were caught by the enemies. Tangut ordered his men to execute Wild Demir and kidnap Halime Sultan but fate saved them from being persecuted. A stranger man shot his arrow right in the chest of the executioner and the other Mongol soldiers, killing them. Tangut escaped the scene, knowing who the man was.

The stranger came forward towards Wild Demir, who asked him to tell his name. The man threw his sword on the ground, and that was when Wild Demir figured out the identity of the stranger. The fans who know the history of the series might have guessed from the starting of the scene who the man was. Yes, we were right, it was Sungurtekin Bey. who saved his uncle and sister-in-law from the Mongols. But where was he all this time when his family thought him to be dead?

In episode 48, Halime Sultan returned to the tribe and met Ertugrul where she gave him Sungurtekin’s message for meeting him. Ertugrul got confused but later on went to the Inn where Sungur was waiting for him. Ertugrul slowly approached Sungurtekin and saw his sword. He bent his hands towards him, but Sungur thought of him as the enemy and abruptly stood up. Upon seeing that it was Ertugrul, the brothers warmly met and hugged as they were longing for each other.

Sungurtekin Bey told Ertugrul where he was all the time since he last met his family. This is when the fans got to know the reality of Sungurtekin Bey. Sungurtekin Bey got captured in the war he was fighting against the Mongols with his brother Gundogdu and father Suleman Shah. He managed to escape his captivity and planned to come back to the tribe but in between, he saved a stranger who was a close man to Genghis Khan. The man took Sungur to the Great Khan where he welcomed and rewarded him for saving his man. This stranger took him into Ogeday Khan’s (the son of Genghis Khan) army where they rode together to fight wars. Ertugrul was shocked when he learned that this stranger Sungur was talking about is Noyan who was an archrival of Ertugrul himself.

Sungurtekin also revealed to Ertugrul that he was working as a spy of Sultan Alleidin in the Mongol army and he reported every move made by the enemy to him. He also showed a seal to Ertugrul, which was the seal of Oghuz Khan to rally all the Turks fighting in the Mongol army and break them apart. Meanwhile, while the two are conversing, their enemy was listening from behind the wall. Noyan had a plan as he knew Ertugrul was coming to meet Sungur at the Inn. He ambushed the duo to steal the seal and managed to injure Sungurtekin Bey. Noyan escaped the scene failing to get what he came for. Ertugrul brought the wounded Sungurtekin to the tribe where he was finally reunited with his mother. Artuk Bey, the tribe’s head doctor cured Sungur, and he then started to take part in the tribe’s political activities.

Later when Ertugrul demanded a migration to Byzantine Empire, Sungurtekin strongly opposed the idea and thought that it was not safe to go there. Ertugrul forcefully managed to take his people and followers to the far of lands and the tribe was divided into two parts. Sungurtekin was again separated from his family. Sungurtekin Bey return in the fourth season, where he helped Ertugrul in every way to entrap Emir Saadetin Kopek and kill him. We also learned about Sungurtekin Bey’s daughter and that he has a family well settled in the other half of the tribe.

The actor Sezgin Erdemir made a cameo as Sungurtekin Bey in the first season of Kurulus Osman in episode 34 as Sungurtekin Bey. He was still working as a spy but got caught by the Mongol Commander. Osman managed to save him where he learned that his uncle was still alive and well. They meet each other warmly and Sungurtekin Bey informs Osman of all the Mongol secrets which Osman can use as an advantage. He disappeared again asking Osman to keep his identity a secret and is never talked about again in the season.

What Episode Does Sungurtekin Die?

But we all know him from the series, and believe that he was like this in his real life, a strong and supportive brother and a son of the Kayi Family.

Temple of Apollo at Didyma