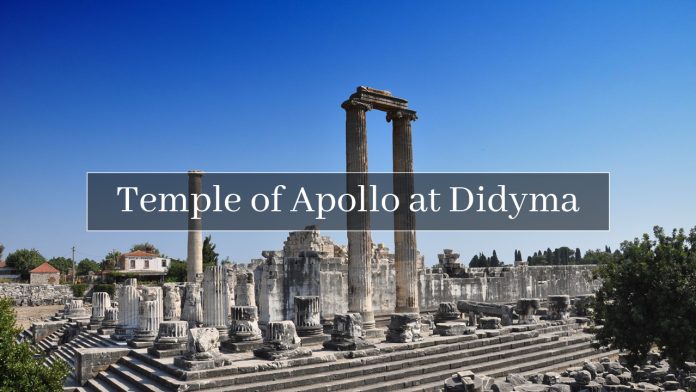 The Temple of Apollo Turkey is one of the most popular temple architectures of the Hellenistic period. The construction of buildings never completed though it started in 300 BC and continued till the second century. From time to time, measures have been taken for the reconstruction of the temple of Apollo Didyma. It is located in the town of Didim in the small seaside resort. The residents of this place used to earn their livelihood through tourism and agriculture. The cultivated land produced wheat and cotton that plays a vital role in the local economy of that place.

One point of attraction of the temple of Apollo is its location. These beautiful monuments is one of the main reasons that makes Turkey a famous tourist place. It is situated opposite the Bodrum Peninsula on the northern coast of Güllük Bay. In the ancient period, Didyma was not well-known as the most popular religious center. It was first built by Greeks with a very simple design with temenos. The place was popular as a sacred area for people. The Temple of Apollo is called the second-largest religious palace after the Artemision of Ephesus. However, the visitors still find more attraction and pleasure on their visit to the temple of Apollo as compared to Artemision of Ephesus.

The temple of Apollo at Didyma’s plan was to build a massive structure. The building was measured to be 109.38*51.14 meters. It is a massive temple structure. It has ten columns on all sides with twenty-one at the front. There are 120 columns that are surrounded at each cella. The place is hidden in the hills and only a few miles away from the southeast coast of Turkey.

The statue of the temple was made of bronze.  During the Archaic period, the temple of Apollo was built in a different way. It used to be a sacred place that was all lined with sculptures and statues of lions. The pilgrims used to come to the place to perform holy activities. In 494 BC, the Persians destroyed the temple when it was under construction. At that time, the temple suffered a decline and this is the reason that no one knows the activities that sued to happen in that place in the 4th and 5th centuries.

In 278 BC, the construction work was resumed. The temple was under the raids of Gauls. Again in 70 BC, the construction was terminated that came into function in AD 100. The temple got converted into a fortress in 262 AD against the Saracens and Goths. The temple faced many reformations and alterations. One again occurred in AD 385 when the buildings got destroyed by for and due to a huge earthquake, in which the towers got damaged and reduced to rubble.

The Temple of Apollo at Didyma is famous for its visionary insights and oracle site. The interior of the temple is very unique and complex. In 1979 some barely visible lines were discovered in the walls of the temple that were actually the blueprint for construction purposes.

Visitors all across the world come to see the place. One reason could be the geographical location of the temple and its construction. The place used to be very popular as a holy site for many pilgrims. However, it is not clear from any historical or legendary source that how the oracles of Apollo used to communicate with the people visiting that place. There are many popular oracle shrines that include Siwa in Egypt, Claros in Turkey, Dodona and Delphi in Greece. All these belong to the Mediterranean region.

5 Things to do in Cappadocia