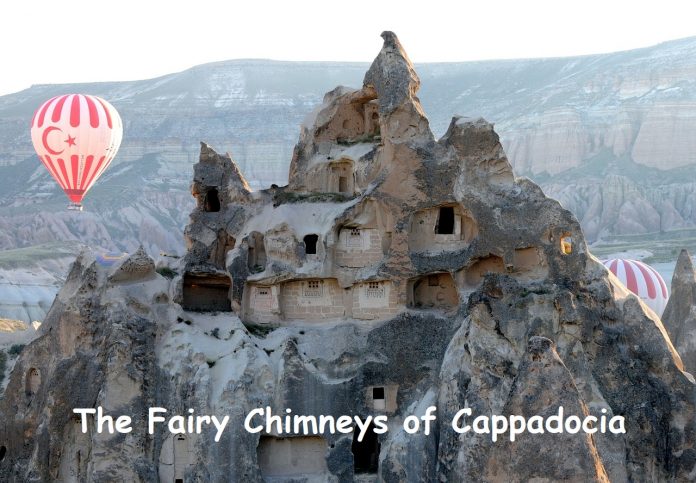 Cappadocia, located in Central Anatolia and known for drawing tourists from all over the world, is home to breathtaking Fairy Chimneys. The Cappadocia rocks along with Cappadocia Fairy Chimneys seem like a magical realm filled with stories of fairies, witches, and wizards, but the magnificent land is the result of a natural calamity, that is ‘volcanic eruptions.

What are the Fairy Chimneys and how were they formed?

Fairy Chimneys are rock structures that stand tall at 130 feet. They are a result of a geologic process, that went on a million years ago. Based on the archeological excavations it is found out that the Cappadocia area was an inner sea. Around that time, Mountain Erciyes, Güllüdağ, and Hasandağı were active volcanoes.

Erupting lava flowed through the plateaus, drying out the inner sea, lakes, and streams. On the dry surface, a tuff layer with a thickness of 100-150 meters was produced. Volcanic ash, clay, sandstone, and basalt are among the soft and hard elements found in the layer. This lava pile has undergone some alterations as a result of the Kızılırmak, valley floods, and winds. Floods were exacerbated by a lack of vegetation and an impervious layer of tuff, resulting in structural changes in the rocks. Nature has been a key factor in the foundation of these Turkey rock formations.

The famous geographer Strabon from Roman antiquity was the first person to draw the borders of Cappadocia. The place has seen numerous civilizations since the formation of Fairy towers. In the Paleolithic period, the inner section of chimneys; natural constructions of the region, were carved, where the first human settlement was located.

The area was plundered and invaded by a who’s who of European empire-builders century after century. At various times, the Hittites, Persians, Alexander the Great, Romans, Byzantines, and Ottomans all claimed the territory.

Throughout the Roman period, victimized Christians fled to Göreme, a town in Cappadocia. The people then learned that the soft tuff could be excavated and built homes and churches in the chimneys. They expanded those ancient caves into underground cities.

A recent search has shown, that there are around 200, interlinked underground cities in Cappadocia. For several years, locals took refuge in these fairy towers Turkey, from the threats of invasion. They barricaded themselves from outsiders with heavy stone doors and complicatedly designed traps. The most famous of these underground cities are Derinkuyu and Kaymaklı.

Derinkuyu the village can be closed from inside with large stone doors. About 20,000 people can be accommodated inside. Certain resources can be found there, such as wine, oil presses, stables, cellars, storage rooms, refectories, and chapels. On the second floor of the complex, there is a spacious room with a barrel-vaulted ceiling. It is said, that the rooms were used as a religious school.

Kaymaklı town is renowned for the houses built around the underground city’s tunnels. These tunnels are even used today, for different purposes. This city’s structure is different from Derinkuyu’s. The city comprises four floors. There is a stable, a church, and storage spaces on different floors.

The famous Göreme Open-Air Museum, the archaeology museums in Nevşehir, the Open Palace, the underground cities of Derinkuyu, Kaymaklı, the early Christian churches, and Atatürk House are the attractive destinations for tourists in Cappadocia.

The number of tourists visiting Turkey’s famed tourist site Cappadocia set a new high in 2019, with the ancient area welcoming more than 3.8 million international visitors in 2018.

In 1985 UNESCO added Cappadocia to its world heritage list. It is one of the world’s most stunning and biggest cave complexes due to the density of its rock-hewn cells, churches, troglodyte towns, and underground cities inside the rock formations.

Once upon a time, an old farmer lived in the Göreme village. He planted crops there but was worried about the harm that could occur to them. While walking through the fairy chimneys he sat down and worriedly thought if the birds might destroy his harvest or if a flood might come. While he was grieving and worrying, to his surprise he saw a number of fairies, that came out of the chimneys, bearing torches. He saw them taking the crops to the storage facility. The old man thought, that he was dreaming but to his utter shock all of that was a reality. The fairies helped him in his work. The villagers were surprised by a large number of plantations however, the old man never revealed his secret.

The magical and mystical realm of Cappadocia is a mesmerizing sight for the travelers who visit. Cappadocia fairy chimneys and hot air balloon rides leave the tourists and visitors mesmerized by the beauty and magnificence of the valley.