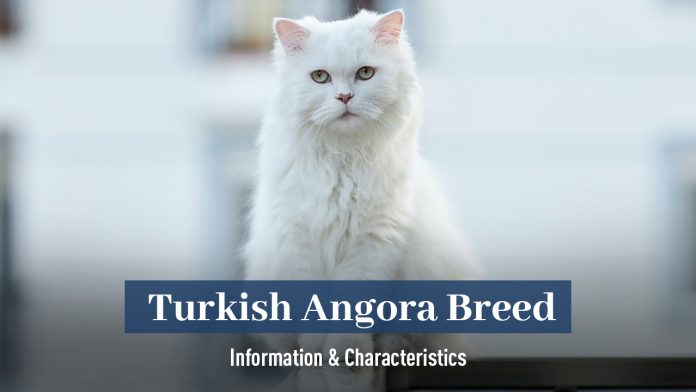 The Turkish Angora is a cat breed that originated in central Turkey, the Ankara region. The Angora cat was also called the Ankara cat but later the name was changed to Angora. This cat’s breed is said to be dated back to the 17th century and is considered to be descendants of the African cat breed. Just like the Angora rabbits and goats, these cats are famous for their white, soft, and long hair. Bred at a massive scale in England and other European countries, these cats were used to start a new breed of Persian cats. This breeding almost led to its extinction but was saved by the Turkish Government. The Angora cat is a domestic animal, but its species are mostly found at the Ankara Zoo.

An elegant and determined creature, the Turkish Angora cat is of a very friendly personality. The Angora cats can easily bond with humans and adjust themselves to the family somewhat quickly. Out of everyone, the cat will build its affection to just one person who it will look over. It can be friends with people of all ages but you should always supervise little children so they may not pull their long hair or its tail. The Angora cats are surprisingly good with other cats and dogs if you have them in your house.

These energetic cats are very playful in nature. They don’t like to be held for a very long time and will jump out of your arms to find something to play with. Being very intelligent, these cats know what steps to take before proceeding with any sort of activity. They are okay to be left alone for a few hours as you can always find them busy playing with something. These cats are fond of heights and will mostly be found sitting in high places like the top of a refrigerator, cupboard, or even doors. They like to be watchful of all the activities happening in the house and adjust themselves according to that.

These are some of the characteristics of the Turkish Angora cat.

The Turkish Angora is mostly found to be deaf and they carry this problem in their genes. Due to this deafness problem, they have a high vocal sound as they can not hear themselves. According to some research, cats that have blue eyes are mostly deaf. Some of the Angora cats have two colored eyes with one side being yellowish and one is blue. The blue side is considered to be the side that can not hear.

These cats carry a serious health problem called Hereditary ataxia. It is a rare condition that can reduce the life span of the cat. If Turkish Angora kittens get affected by this disease, they can suffer from serious shaky movements and can die at an early age.

Hypertrophic cardiomyopathy is another genetic illness found in these cats. Due to this illness, the cats can face a severe cardiac condition and is mostly found in male cats. The cats suffer from this genetic condition mostly at the age of 2 to 6 years. Not many cats tend to face these problems as they are rare. Still, you should get your pet screened at an early age to avoid any mishap.

Taking care of these cats is an easy job. Because there is no undercoat, the Angora cats do need extensive brushing. You can brush them one to two times a week only. Due to long hair, dirt particles can get trapped around their eyes and ears and you can clean them with a piece of a damp cloth.

Just like the Angora rabbit, the price of a Turkish Angora can depend upon its age and where you buy it from. If adopting from an animal shelter the price can range between $70 to $150. On the other hand, if you’re looking for a breeder that mostly offers Turkish Angora kittens for sale, the price can jump from $ 500 to $2100. The kittens that can be raised for cat shows and competitions can cost more than $3000. The prices can vary when