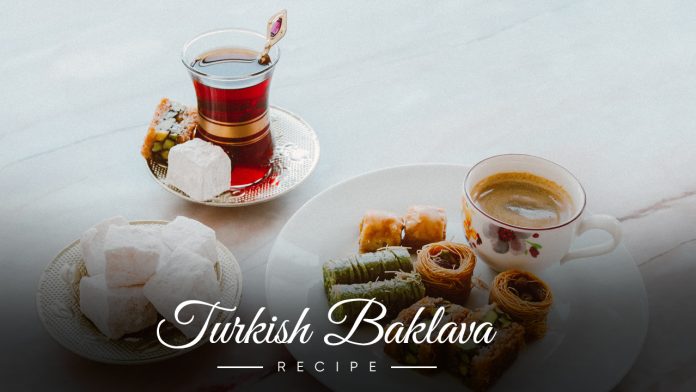 With sweet and nutty bites, Turkish baklava completes your meal. The baklava has its own place in the list of Turkish desserts recipes and makes sure it remains at the top of it. The look and the taste of baklava will make you want to eat every inch of it. If you visit Turkey, you should try the famous baklava. Every Turkish restaurant serves this as a dessert after meals and you can also find it being freshly baked in the sweet shops. You can take the Turkish baklava recipe back to your country and try making it yourself at your home so that you would not miss the delicious dessert. This article will guide you through the ingredients and steps required to make the baklava at home.

Most people assume that the traditional baklava recipe only belongs to Turkey but to our surprise, no one really knows who is the real owner of this dessert’s recipe. Baklava originated from many countries and is a historical dessert. One of the countries is Greece and the Greeks staunchly believed that the baklava is their traditional dessert and the same was with the Turks. Greece, being a neighbor of Turkey, was at war with them for a long time but after the issues cooled down, the locals from both countries began settling in each other’s land, and hence baklava originated out of the two.

The Turkish people will tell you that baklava is their tradition but there is a difference between the Turkish baklava vs Greek baklava. The Greek baklava has a different recipe and the ingredients include walnuts, cinnamon, honey syrup. On the other hand, the Turkish baklava has pistachios, sugar syrup, and lemon juice included in the ingredients. Other differences also include the way the baklavas are cut and presented.

Other countries that make and serve baklava as a traditional dessert are Armenia, Azerbaijan, Romania, Iran, and Algeria. All these countries have their own unique taste and style of serving.

Baklava has a lot of types as it originated from many countries, but when someone speaks of this dessert, the first name that comes to mind is Turkish Baklava. The Turkish pistachio baklava recipe will be discussed in this article because most of them are made up of pistachio nuts. Additional flavor is added to it by pouring a tasty syrup made up of sugar and lemon juice. The dessert is made up of thin phyllo dough sheets layered on top of each other. Melted butter is spread between the layers to build a flaky surface.

8 phyllo sheets are used to build the base, and then some delicious nuts are sprinkled over to give it a nutty feel starting from the bottom. The same number of sheets are stacked over the nutty base and more nuts and butter is added on top of that following another layer of dough sheets on the top. The syrup is poured over it to give it a sweet flavor and your ultimate baklava is ready for serving. Turkish baklava calories are low and with nuts added, it becomes very healthy.

But how can we prepare the dough sheets and syrup for the dessert? Let’s find out.

The Turkish baklava ingredients are very simple and easily available in the market. Most of them are already available at your home beforehand except the phyllo dough. The ingredients are divided into two parts, Baklava and Syrup.

When all the ingredients are gathered it is time to make the baklava. Here are some simple steps to make it.