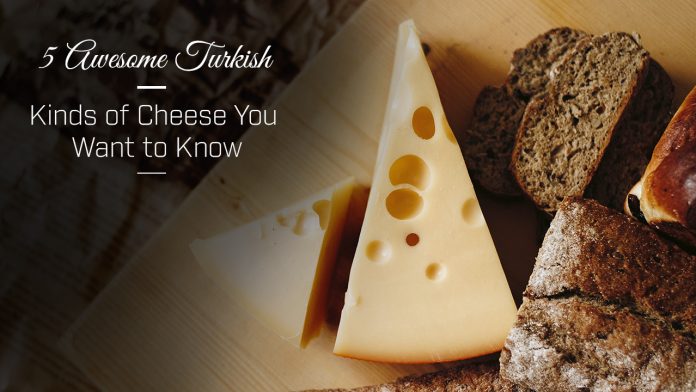 Cheese is loved by everyone but it will not be wrong if we say that Turkish love cheese more! With 193 different kinds of cheese, Turkey offers a wide range of tastes to their special cuisines. If you are a cheese lover and went to Turkey, you might have identified the different aromas and significance of every cheese. Turkish table is incomplete without any sort of cheese. They serve cheese with bread in breakfast, desserts, and on top of their Turkish traditional cuisines.

Every type of cheese produced in Turkey is different in its nature. The reason is that dairy products are produced in multiple regions of the country with different techniques. Different experiments and blends produce a unique taste and form of cheese. The procedures differentiate the taste of one cheese from the other. Thus, every cheese plays its central role in giving wings to the taste and aroma of Turkish traditional cuisines.

This article demonstrates five awesome Turkish kinds of cheese that you want to know and eat when you visit Turkey.

Beyaz is one kind of Turkish cheese that basically is white cheese. It is a standard flavor of cheese that is made with different techniques. Beyaz is made from cow, goat, or sheep’s milk, and based on the procedure followed, the cheese tends to be soft or hard. It is compared with Greek feta cheese due to its texture and flavor. The cheese is produced from whole or half milk. It is a part of Turkish breakfast due to its smooth nature. This white cheese is pure without any rind or skin. The fat-rich cheese becomes easy to get spread over the toast.

Beyaz is a common cheese of Turkey. You can easily find it at the corner stores and the supermarkets. The white cheese goes through a very streamlined process. It is also served with melons and watermelons. You will find out that the taste of Beyaz is also different when you buy it from different vendors. The change could be due to the breed of animal, the process it went through, or the nature of the region where it was produced. Though the smooth texture like pure milk remains the same.

If you are looking for a creamy-textured cheese, Izmir comes on top of the list. Tulum (TOO’-loom) is a very common cheese that is highly moistured and creamy and gets melt very easily. It is used in the main course meal as it easily gets mixed with the food and gives the ultimate taste of the cheese. It has a long shelf life and is used both in dinner and breakfast. Tulum is made from both cow’s and sheep’s milk. It is used in baking dishes and is eaten with bread most often.

Tulum is the oldest cheese used to produce in Anatolia. There are many branded versions of Tulum available in the supermarket of Turkey that are uniform in their taste and form but vary with respect to purity. It is served with flatbread, walnuts, and sweet butter. The saltish flavor in Tulum makes it stand out am omg all other cheese. The cheese is kept in saltwater for some time that strengthens its consistency and gives it a very rich flavor that goes well with the food.

Orgu Peyniri” (euyr-GOO’ pay-NEAR’-ee) or the braided Cheese, also called Diyarbakir is a regional cheese that comes from the southern region of Turkey.it is produced with a mixture of goat and cow milk. The procedures follow a natural way due to which it is not considered as an ordinary cheese. It is salty, hard, and uniform cheese that is given the shape of a braid. It is a must ingredient of some delicious Turkish appetizers that enhanced the taste and aroma of the dish.

The cheese follows a very special method to give the shape of a braid to the cheese. This is the special art given by masters of that region that is still followed. To give a fluffy look to the cheese, it is fermented with Siran yeast. The fascinating yet delicious cheese is part of the breakfast table.

Lor is another kind of most popular cheese in Turkey. It has a different process for production as compared to other kinds of cheese. It is made from the leftovers of the milk curds that give it a thick consistency. It is used in Turkish cuisines and it does not change its form even when it is heated. The strongly grated pieces of cheese enhance the flavor of the food.

This is the white cheese whose taste is very similar to cottage cheese. It is unsalted cheese that is used in bakery items and well as in some desserts. The cheese is grated and sprinkled over the food that boosts up the taste. It is mixed with different herbs and spices in the breakfast as well as in dinner.

One special thing about Otlu cheese is its aroma and very unique taste when it gets melts over the food. Mixed with herbs, the cheese is used with freshly baked flatbread, which is healthy and fulfills the ultimate desire of herbs. Van Otlu has enhanced taste and quality. It is produced in the spring season when sheep give more milk and more local herbs grow.

Find out which cheese suits your taste buds!