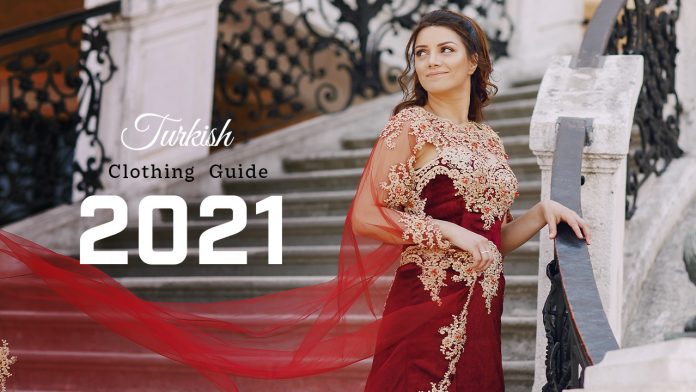 Turkey has undergone a major change in the form of culture and tradition. Whether it’s their lifestyle or clothing, everything has adopted the colors of international fashion. A nation which has its own identity of woven clothes, handmade embroidered casual clothes has now shifted to European attires. The glorious traditional Turkish clothes have been replaced by western clothing today.

In Turkish clothing, women, the queens of the home, always dressed superior to men. In today’s world, what we call baggy pants, Turks acknowledged it as ‘’Turkish Salvar’’. Women wore traditional clothing in different ways such as a long skirt with embroidery on the border and a one-piece long dress with motives representing their Turkish culture. In the past, Turkish women kept their modesty in dressing by covering heads with a scarf.

Turkish men are also not less than women in traditional clothing. They wear Turkish salvar and put on a loose coat known as ‘’Jubba’’. They carry a red hat known as a fez.

When life was simple and there were no clothing industries, the Turks were famous for creating clothes in the home. They made their regular clothes by weaving. Women were so skilled that they could prepare any cloth with traditional touches and motives depicting their rich culture.These clothes were made colored by using plants dye. They were given shine from stones of the lakes.

Even each region has different clothing styles depending upon economical values. Those areas that were stable, the rich people belonging to that area had fur on their coats as they had plenty of animals for their livelihood. The feathers of rare birds were put on the broach. These brooches were pinned on the right side of the coat or on the headpiece which made them prominent in the crowd.

These people own horses as horses were the main mode of transport at that time, and were recognized by leather jackets and leather belts. Even leather was used to cover tabletops and as a blanket in cold areas.

In the sixteen century, the Ottoman Empire was at its peak. It’s known as the golden era. During this regime, Turkish industries were on the boom. New weaving techniques were introduced. Specific dresses for royals were created to make them superior to the common man.

Turkish dresses for the king were prepared in a specific place called ‘’Hassa Nakkaslari’’. The royals of the Ottoman Empire had their favorite tailors who prepared their court dresses in front of their eyes. Royals had unique dressing requirements i.e. Kaftan. These ‘’Sultan Kaftan’’ were prepared with luxurious and expensive pieces of clothes. Sometimes, these clothes were imported from Italy.

Sultan Kaftan had threads of gold and silver. The Inner of the Kaftan had a place locally called as Oya. These Oya were made up of crochet or net. They were sewed on the belt area of the inner rob of Sultans.

The headgear of the Sultan had significant value. It was different for every activity and came in many types. Most famous ones are ‘’Horasani’’ and ‘’Mucevveze’’. Horasani is a hat made up of wool and Mucevveze is wrapped in muslin.

In 1826, a new army was formed taking the ruling body in their hands. They have made several changes in Turkish attires. Clothing industries were given new laws. So, it was the beginning of new modern Turkish clothing.

Clothing industries were inspired by western fashion. Traditional welfare schools were transformed into fashion schools. Young students were so impressed that they preferred the latest world fashion over their own traditional clothes.

With the establishment of the Republic of Turkey, in 1923, More amendments were seen in attires of the Turkish nation. Women were seen as more interested in modernism. They preferred jeans and a top over traditional Turkish Salvar. Even they were forbidden to veil and cover their heads with a scarf. However, Muslim communities were free to follow their modest clothing i.e. black abaya and veil.

Turkish students went abroad to learn the latest trends in fashion. They introduced floral maxi dresses, short skirts, and many other dresses that were never worn in Turkey. Stipend and floral print/ polka dots and ruffle tops were a huge success. Turkish women felt freedom in mini skirts. They replaced modest dressing with long coats and mini skirts.

Now, you can’t distinguish between Turkish women and any other women of the western country due to similar dress codes. Being the most popular destination in the world, Turkey has fallen under the influence of international tourists around the globe. It’s totally their choice how they want to come out from their home for a casual shopping day in a trouser and tank top or fully covered in abaya!

We hope you like our take on Turkish clothing. Do give your feedback in comments. Stay connected for more stunning stuff.