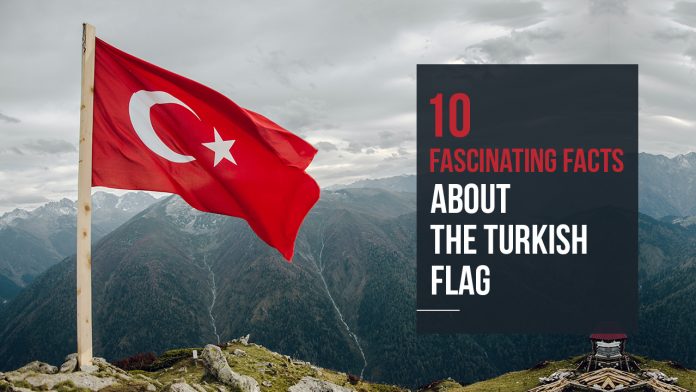 If you are planning to visit Turkey, you might need to refresh some interesting events related to the Turkish flag. The Turkish flag has a rich and iconic history behind it. The tons of facts connected to the flag will perk up your visit to Turkey. The history was established before the Turkish Republic and Ottoman Empire. The use of star and crescent symbols of the Turkish national flag started in the middle of the 18th century.

So, let’s go through the interesting facts and events about the flag of Turkey.

Origins of the Symbol

Turkish flag colors and iconography were developed in the period of the Kingdom of Pontus, the city of Byzantium, and the Bosporan Kingdom in the 1st and 4th centuries BCE. The icons of the flag are said to be used in the ancient near East that used to represent the morning star and moon, or the sun and moon

The crescent symbols and stars (as can be seen in the image of the Turkey flag) are associated with Islam. However, when it comes to looking at the origin of the flag, it appears to have origins in Central Asia and Siberia. The reason is that these people had faith in the sun, moon, and sky and used to worship them as gods. This is why they used the crescent symbol and star during worship.

Games are Hosted in Turkey

Turkey is one of the top tourism places. People used to visit Turkey more in the winter. It is also said that most of the Olympics and winter games are hosted by Turkey. Turkey has some snowy parks and fun points for tourists where they arrange amazing games and prizes.

It is famous that there are many Turkish languages whose life and activities were deeply influenced by the look of the flag. For example, legends from the Battle of Kosovo that occurred in 1448. It is said that one of the fighters from the battle was in the field when they saw crescent and star in blood and that this is a reason the flag got the red color.

It is said that the symbols in the Turkish flag have meanings related to Goddess Diana. She was the goddess of wild and domestic animals and hunting. She used to help women in their childbirth and was considered a fertility deity. It is believed that the symbols in the flag somehow demonstrate honor for her. According to the theory, the acuity of Byzantium has picked this sign in honor of Diana.

Respect for the Turkish Flag

There are some fundamentals related to the Turkish flag that are followed in all areas. For instance, it is said that when a flag becomes old, it should be taken down and replaced with a new one. Moreover, the flag could not be stepped on in any case. Respect for the flag is crucially important.

The flag is permanently kept in two places in Turkey which include the Mausoleum of Ataturk and the Turkish Parliament. For the salutation purpose, the national flag must be hoisted on the official buildings and schools. On Monday mornings, students gather and salute their national flag.

The dream of the Ottoman Sultan

It is said that one of the legends, Ottoman Sultan Osman, saw a dream in which a crescent and a star rose from the chest of a judge of Shari’a court whose daughter he wanted to marry. He saw that the crescent and star then sank into his breasts and a tree originates from it whose branches cover the world with its shadows.

Many flags with Crescent and a Moon

Turkey is not just one country that has a crescent and a star on its flag. Azerbaijan, Tunisia, and Algeria also have a crescent and a moon on their flags. The reason for using it is their connection with successors of the Ottoman Empire. Not only this, Pakistan and Mauritania are also using these symbols in their national flags.