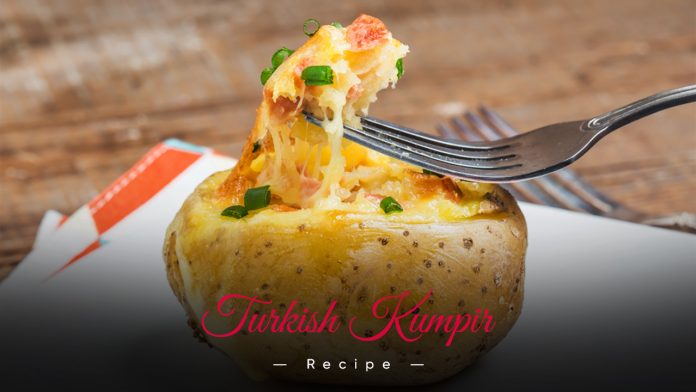 The king of all potato recipes, the Turkish kumpir recipe is the best of all. If you like eating potatoes, then this is a much-recommended potato dish you could try. Although it is considered and commonly known as Turkish street food, you can easily make this at your home.

A Turkish-style baked potato, kumpir is a famous street food that is cut opened and seasoned with extremely delicious dressings. You can fill your kumpir with sauce and toppings of your own choice. You can make it fill with meat if you are a meat-lover or top it with vegetables if you are a vegetarian. Some of the restaurants offer a buffet system, where you can customize your kumpir according to your taste and flavors.

Turkish Potato recipe is nice and easy to make. It is just like making other potato dishes, but kumpir’s fillings are what make it unique in taste. Filled with cream and cheese, the baked potato has a soft and crispy jacket (skin) which makes it easier to eat. Let’s go through the Turkish baked potato kumpir recipe and learn about its ingredients and steps for making it.

Preparing kumpir will take more than one hour. The preparation time is about 20 minutes because you need to prepare the potatoes as well as the kumpir toppings. The cooking time is almost an hour or a little more.

A basic baked potato recipe is the same as any other potato recipe which consists of large potatoes, cheese, butter, and other fillings. The toppings and sauces are what give the kumpir its unique taste and differs it from others. Some common kumpir toppings include pickles, stir-fried or boiled vegetables, different types of salads, hummus. Sauces can include ketchup, mustard sauce, bbq sauce, or mayonnaise. You can also top it with minced meat or chunks. You can always alter the kumpir recipe if you are a vegetarian. Just replace meat with vegetables and you can get your vegetarian kumpir.

Turkish kumpir recipe is easy to follow and you can make this at your home without any hassle. The best part is that you can remove, add, or alter any part of the ingredients when making this, except the potatoes. They remain constant throughout! Here are the steps and instructions you should be following to make this delicious dish.