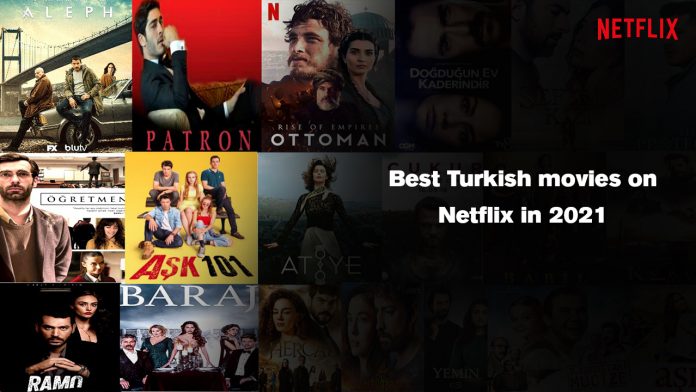 Millions of subscribers of Netflix worldwide watch out for exciting Turkish movies and TV shows. From the last year, as coronavirus has also gained ground, people have become more confined to their homes and to keep distracted from current situations, they are catching up with some of the Best Turkish dramas and movies on Netflix.

In the past few years, Turkish dramas are gaining popularity all across the globe. Their TV series and dramas and the overall cinema industry are becoming world-famous with thrilling new projects. The blend of Turkish culture, Islamic history, and modern developments are shifting the paradigm of Turkish drama series. The cultural markets of Turkey are transforming with the passage of time and the new Turkish movies are incorporating them wisely. The domestic popular movies of Turkey are increasing fame at both national and international levels.

Where to watch the Turkish series?

It is a TV series that needs no introduction. It is a Turkish historical fiction television series in which 13-century warrior agrees to fight with the enemies of Sultan for new tribal land with the aim to bring justice and peace in the communities. Though it was filmed in December 2014, it is still gaining fame all across the Arab world. Particularly in Pakistan and Azerbaijan, the show is well-received. It is a must-watch Turkish Islamic drama on Netflix if you love Islamic history and plots.

Paper Lives is the latest Turkish series in which a cherished fellow helps everyone in need. Whether it is a teenager or homeless child, he helps everyone and earns by collecting paper. This Netflix Turkish series is also available with English subtitles. The series is of a very kind nature that focuses on helping and doing good deeds. It is filmed in the streets of Istanbul. The boy Mehmet runs a warehouse and takes care of a little boy.

Have You Ever Seen Fireflies?

It is a comedy Turkish movie that plots the story of Gulseren who was born in Istanbul in 1948. She is a rebellious and intelligent woman who grew up in a society bearing many ups and downs. In this movie, she and her family try to keep up with the social and environmental changes. During the journey, the genius Gülseren navigates the aspects of life in which she determines love, loneliness, and loss against the social changes.

This Turkish TV show is an entertaining yet thrilling TV series at the same time. It is a story in which the main character does not know his true identity or even name, or family. In this whole show, the main character is digging out his life story, past, and ups and downs. There is also old-school Turkish humor in the show that gives an entertaining element to it. One important thing the Tv shows up is the Turkish culture whose realistic image is well-incorporated in the series.

The movie is about a discontent Aziz. He is facing a mid-life crisis in which he has lost his relationship and job and his family is also not with him. With the struggle in life, he is now seeking relaxation and peace in his life. Azizler is available on Netflix and you should watch it to get to know how he survives and shapes his life. This exciting series will never disappoint you and I recommend that you should give it a try.

It is a crime/thriller Turkish movie that will be heading on screens in 2021. The movie is about a girl named Fatma who is searching for her husband who is missing. During her search, she unknowingly commits a murder and the movie is about how she gets away with it. The show is already gaining popularity and you can easily find it on Netflix.

One of the most awaited TV series that is based on the novel of Elif Shafak’s written in 2009. It is heading sometime in 2021 and you can watch it on Netflix. The series will be covering the life of 13th-century Islamic scholar, Rumi, and lonely housewife, Ella. The bond of Shams and Rumi as stated in the novel will be depicted in the original Netflix series that is expected to get so many hits.

Midnight at the Pera Palace

This amazing TV show is going to cover the birth of modern Istanbul that is based on a nonfiction book with the same name. The novel is written by Charles King. the series is going to be awesome that will be giving iconic research and the historic background of the while finding out some interesting facts about Istanbul history and founder. You can find the series on Netflix and enjoy the amazing plot.

It is one of the romantic Turkish movies and series. If you have the taste for romance, you must give this series a must-watch. Netflix is featuring it and has got very good reviews. The series is also a blend of comedy with such sweet characters. In this love story, Burcu Özberk is playing the leading role of a woman who gets married to a man named Kerem. Caglar Ertugrul is playing the role of Kerem. The series is already gaining popularity and has become the most-watched series on Netflix as well. The series incorporates the sweet stories very well that you will be getting rid of any of your worries by watching this.

This is a mystery and fantasy series that is gaining too much appreciation from its viewers. It is a Turkish TV series that is watched across the globe. This is the reason that the first season of “The Protector” has become premiered by Netflix. The worth watching TV series have the top cast in which the leading role of Hakan Demir is played by Cagatay Ulusoy. In the series, he will be fighting with the dark forces with his special powers. The first season of the TV series got a big hit and it is expected that the next seasons will also collect huge fame.

The article has given a comprehensive list of the TV series, movies, and shows that you can watch in 2021. These shows have gained popularity not only in Turkey but all across the globe especially in the Islamic world. The actors and the advanced entertainment industry of Turkey are making wonderful projects that are winning the hearts of viewers. So what are you waiting for, select the genre and find out the best fit of your interests on Netflix…