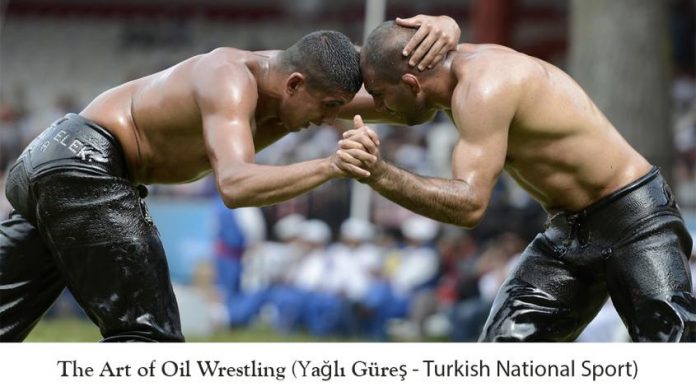 Turkey is a fascinating country with interesting cultural practices that both educate and fascinate tourists. An unusual martial art you will come across there is ‘Yagli Gures’ which means Turkish oil or grease wrestling. It is famously known as Turkey’s national sport that dates back to the legendary Ottoman Empire. Janissaries, the elite soldier class of Ottoman society, trained extensively for combat and wrestling was an integral part of their program. According to tradition, the Janissaries used olive oil to keep their bodies cool and often mixed the oil with herbs to ward off mosquitoes after hours of rigorous training. Let’s turn the clock back and study its origins before we move forward.

The earliest historical evidence of oil wrestling goes all the way back to ancient Egypt. Through maritime commerce, oil wrestling became known to East Europe, primarily the Thrace Region, the Balkans of the present day. It was a traditional event for social gatherings such as weddings and festivals.

Wrestling competitions were common in Ottoman culture. Sultans would often welcome and honor the ‘Pehilvans’ (wrestler/champ) in their palace. The elite military group of bodyguards tasked with ensuring the security of the imperial rulers largely influenced these Pehilvans because they were both soldiers and sportsmen. This is why for Turkey, oil wrestling is a sport and martial art. Notably, Pehilvans were treated just like celebrities, similar to the gladiators.

Before the match begins, the wrestlers appear in leather trunks and douse themselves with olive oil. They step barefoot on the stadium and prepare themselves for the match. Using olive oil as a part of the game only makes the moves trickier. This is because the difference that even a little bit of substance like oil can have on grips and overall control is remarkable. The purpose is to make it difficult for a grappler to get a hold of his opponent, let alone pin or submit.

So, how do you defeat your opponents? If you observe other forms of wrestling, they are as easy as ABC because all you need to do is knock them down. This is where Turkish oil wrestling rules are different. The real challenge lies in grabbing a 250-pound man covered in oil and wrestling him to the ground without injuring him.

Yagli Gures is not free fighting because you have to push and pull continuously and strategically. It is a true test of strength and skill where contestants use up to three tons of olive oil. The rules have slightly changed over the centuries. A long time ago, matches would go on for hours or even days, and the only way to win was to pin one’s opponent to the ground. There were even fatalities because contestants always used a lot of energy. Today, you can win on points, and the duration of matches is thirty to forty five minutes.

Wrestlers fight stripped to the waist and they wear traditional leather trousers known as kispet. These are also covered in oil and can weigh as much as 10kgs when saturated. It is possible for participants to grab a hold of the material and use the waistband to turn their opponents. Or, one can insert his arm into the kispet and leverage this as a handle to overcome his opponent.

Another strategy to secure a victory is to lift an opponent up on one’s back and take three steps without his feet touching the ground. Alternatively, you can seize him from his feet, turn him upside down, and get him on the ground. If he is an expert, he may counteract without touching the floor and reverse positions.

Generally, twelve referees and twelve musical bands accompany the pair of wrestlers to the stadium. The participants slap their knees and jump as they move across the field. Drummers in Ottoman costumes maintain a steady beat before the match starts and announcers sing praises of the contestants. When the tension escalates, the music adapts accordingly with rhythm changes. Insulting and hitting is strictly prohibited during the match.

As Turkish oil wrestling dates back to the Ottoman Empire, respect in the sport is essential. It is not surprising that Yagli Gures championships are more peaceful than other games such as basketball and soccer. The wrestlers demonstrate the true spirit of sportsmanship in many ways. Examples include sharing food, water, and sports supplies, engaging in conversations, helping each other when unexpected issues arise, and congratulating the Turkish oil wrestling champion after the final round.

Does all this sound interesting to you? If so, watch videos online to better understand how it all works. In fact, why not visit Turkey to see everything live? This will be an experience that you are sure to remember!