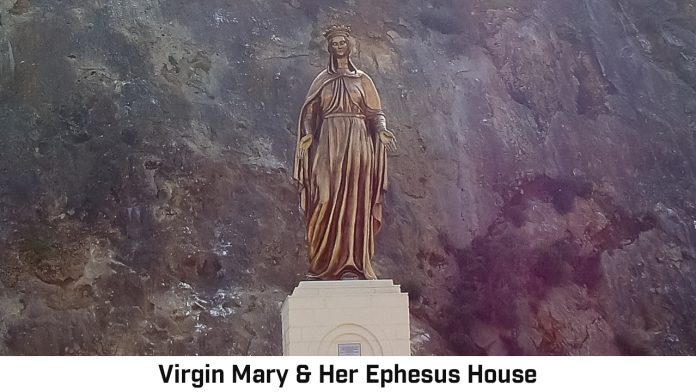 Turkey is a country famous for its cultural and historical buildings. Many of its sites have religious value and they are equally blessed for Muslims and Christians. Ephesus, in particular, is famous because of the house of the Holy Virgin Mary. In Islamic Studies she is known as Hazrat Mariam (A.S). According to history and popular belief, the house of the Virgin Mary is the place where Mary, mother of Jesus, spent the last few years of her life in isolation.

How Ephesus Ruins were discovered?

There are many myths related to the discovery of Mary’s House. Anne Catherine Emmerich was a young girl of a farmer’s community in Germany. Later, she joined Augustinian Nuns. She was famous for her religious thoughts and as a strict follower of Jesus’ teachings. At the age of 28, Emmerich became ill and strange wounds appeared on her body. In 1813, these marks were declared stigmata. In Christianity, these scars are related to Jesus’ wounds, and a person is considered blessed.

Emmerich became the talk of the town. Her health deteriorated and she was bedridden. She was known for dreaming and had mystical visions which she shared with the people visiting her. Soon, many popular influencers of the community visited her to understand whether she was a fraud or truly blessed by God.

Brentano, a renowned writer, met Emmerich. He was told by Emmerich that God has chosen him to pen down what she says. Brentano considered himself lucky and made notes. He visited Emmerich regularly for 5 years.

Emmerich & her Dream of Virgin Mary

Emmerich shared her dream about the House of Virgin Mary,

‘’Mary spent the last years of her life on the hill. The hill was near Ephesus. Her house was three hours from Ephesus on the left from the road of Jerusalem. The path is not straight. It steeply turns in different ways. The road is narrow and extends to the hill towards the south. After walking for half an hour, there comes the house of pious Mary.’’

Brentano also stated in his book the details of Mary’s home as described by Emmerich: ‘’Her house is made up of rectangular irregular stones. The windows are small, positioned on the top near the roof. There is a fireplace in the center.’’

On October 18, 1881, for the very first time a French priest, Abbe Julian Gouyet discovered a small stone building in ancient Ephesus. He was sure about his discovery of Mary’s home as described by Emmerich but nobody believed him. After 10 years, Sister Marie de Mandat-Grancey along with Father Poulin and Father Jung rediscovered Ephesus’ ruins and declared it Panaya Kapulu meaning “The door to the Virgin”.

There is a distance of 6 km from the center of Ephesus to the House of the Virgin Mary. Tourists are welcomed with a big statue of the Virgin Mary at the beginning of the hill which leads to the road towards the famous Ephesus ruins. This statue was gifted by the Mayor of Selcuk, Zeynel Bakici. This golden shiny status is often compared to the Statue of Liberty in New York but religiously, it has no match.

Along the roads, there are many boards for tourists guiding them including the directions and historical facts which are written in different languages. Then, there is a small statuette of Emmerich. In the beginning, this statue was inside the House of the Virgin Mary. In 1960, Father François Saulais placed it in the current location.

What to Expect upon Reaching

There is an entrance fee of 35 TL. If you need to park a car there, you have to pay an extra amount as a car parking fee. The timing for visitors is 8 AM to 6 PM. This holy place is open 7 days a week.

Firstly, you will see a souvenir shop. Next is a small cafe where you get some food items and beverages. After crossing these, there is the baptism pool. Right next to it is a seating area for worship. Always remember, it’s a functional chapel and a mass gathering is held every day for praying.

Inside House of Virgin Mary

This is a very small house which is now half renovated. The roof is completely new as it was ruined when discovered. Now, Christian and Muslim communities provide funds to keep this Holy place close to the original architecture. Before entering the metal gate of the house, you have to stand in a queue and wait for your turn. It’s requested to cover your body in maintaining the decorum of the holy place.

People get candles at the entrance to light them when they enter the house. There is a statue of Mary where people stand and offer prayer silently. Next are two other small rooms. One is a storeroom and the other is supposed to be the place where the Virgin Mary spent the final days of her life.

The House of the Virgin Mary is famous for holy water. There are three metal tapes. According to locals, each tape represents a phase of life. One is for wealth, the second is for health and the last tape is for fertility. People from far off places visit here and get blessed by drinking water from these tapes.

There is a popular concept of the wall of wishes in Turkey. This is where tourists leave their message, a close belonging such as a piece of cloth, or even chewing gum. Till 1999, the surrounding walls of the fountain were used to stick chewing gum as a hope to get wishes fulfilled. Before the visit of Pope Benedict XVI, in 2006 a signboard was placed,

Translation: It is forbidden to affix chewing gum.

Now, there is a huge metal gate with allocated areas for the wishing wall. There are iron grids where devotees and tourists tie small cloth, tissue and paper with their handwritten wish on it!

National Animal of Turkey and Details

How to Find a Job in Turkey for Foreigners

Tired of your boring routine and want to escape from dull life but have no idea where to begin? Well, here we...
Read more