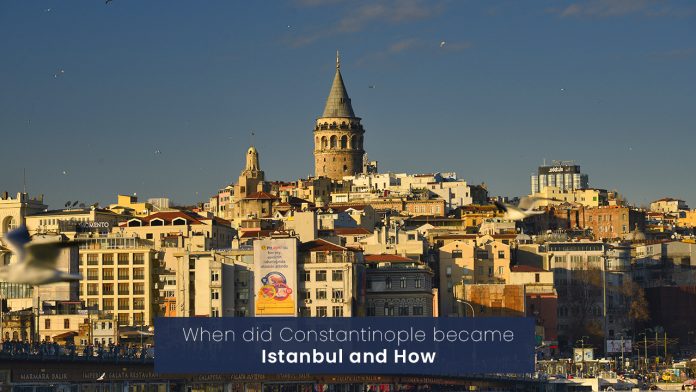 Constantinople is an ancient city in modern-day Turkey that’s now known as Istanbul. First settled in the seventh century B.C. Constantinople developed into a thriving port thanks to its prime geographic location between Europe and Asia and its natural harbor. Constantinople remained in the Byzantine Empire for 1100 years. During this huge period of time, it faced many horrific battles and some great fortunes. In 1453, it was then defeated by Ottoman Empire Mehmed II.

The ruler Byzas belonged to Megara, the ancient Greek city. He founded a settlement on the strait of Bosporus in 657 B.C. that was on its western side and links the Mediterranean sea and Black sea. The natural harbor by the Golden Horn then grew Byzantium into a port city. For some centuries, the Constantinople Byzantine Empire was under the control of Spartans, Persians, Macedonians, and Athenians when they tried to get power in the region, the Roman Emperor Septimius Severus devastated the city around 196 A.C.

After the defeat of Licinius who was planning to become the sole Roman Emperor, in 324 A.D., Nova Roma, a new emperor was founded at Byzantium.

Watch Resurrection Ertugrul with us

Before the start of the Common Era (C.E.), Constantinople tended to be the capital of Byzantium that was its later name (before it was known as the Byzantine Empire).  This new name was given in 700 B.C.E. by the Byzas. At that time, there used to be a small population of Greeks that were living there until 300 B.C.E. After this, Byzantium was declared to be ‘New Rome’.

After the attempt of Venetian rulers to conquer the city in which they actually got successful and ruled from 1204 C.E. to 1260 C.E., the empire used to be under the control of Romans. They ruled until the Ottomans conquered it in 1453.

History has this one most interesting question: how did Constantinople get conquered by the Ottoman Empire?

According to Fleischer, the Ottoman republic was considered one of the many territories in northwestern Anatolia and the Balkans. He said that the Ottoman principality is closest with respect to senses and it had been the dream of the Ottoman to conquer the city. There were some traditions of the Prophet Muhammad that helped them conquer the city of Rome.

Ottomans had been expanding their empire for decades to become the major ruler of the World. The Ottomans had been through various attempts to conquer Constantinople in the 1300s but all in vain. Finally, Sultan Mehmed II conquered the city after a fight of 55 days. This is when Constantinople became Istanbul. His army showed union and attacked the sea and land of the Empire. After conquering it, the Ottomans named Constantinople Istanbul, this is why Istanbul changed its name. They have taken over multiple huge territories such as Greece, Bulgaria, and Yugoslavia. There have been many docudramas on the Ottoman History and Empire that have become very popular among modern audiences.

Constantinople then became the capital of the Ottoman Empire as Istanbul. The city got a huge population of Armenians, Greeks, and Jewish under the rule of the Ottomans. The immigrants enjoyed social lights and religious freedom. They got to live a life full of enjoyment and freedom. It shows that Ottoman rule appeared to be much peaceful for the immigrants. Suleyman the Magnificent was the Ottoman leader whose struggles, decisions, and military conquests played a vital role in bringing wealth to Istanbul.

Till the life of Suleyman, the empire had gained ground. However, when he died, the empire started to decline and the allied troops occupied the empire after the end of WWI. The war hero and the commander Mustafa Kemal Atatürk, in 1923, established the Republic of Turkey after the war that lasted for four years. The capital of Turkey then was moved to Ankara. Istanbul at that time and even today remains a cultural and commercial center due to its strong historic sights and structure.

Temple of Apollo at Didyma