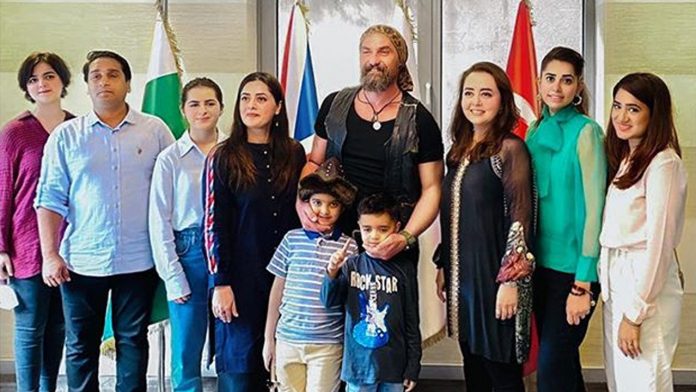 It all started with Engin Altan Duzyatan and Esra Bilgic who played the leading roles in the series. We all know them as Ertugrul Ghazi, an iconic figure from 13th-century Anatolia who prepared the ground for the establishment of the Ottoman empire and Halime Hatun, his wife.

Their popularity in Pakistan is evident as Duzyatan is scheduled to visit Lahore, Karachi, and Islamabad in October on a 3-day tour known as Jashn-e-Ertugrul. Esra Bilgic recently became the new face of mobile company QMobile and telecommunications network Jazz. If we are to believe reports, she will also sign an agreement with the Pakistani cricket franchise Peshawar Zalmi.

Fans are in for another surprise as other cast members also hopped on the bandwagon. They were seen working with a couple of big names in the Pakistani industry. Two of the celebrities are Nurettin Sonmez and Cengiz Coskun, otherwise known as Bamsi Beyrek and Turgut Alp in Diliris Ertugrul. They signed an agreement with J. as the brand ambassadors of its line of fragrances.

Maria Butt, the founder of Pakistani clothing brand Maria B., took to Instagram and uploaded a picture of Sonmez meeting her and a few others from her circle. She also posted a selfie with an exuberant Sonmez and stated that she looks forward to their collaboration on upcoming projects. Earlier, she surprised her followers and Didem Balcin’s fans by sharing photos and videos with the top Turkish actress. Butt announced Balcin, known for playing the role of Selcan Hatun in the drama, as the model for her label’s upcoming winter collection. Currently, the designer is visiting Istanbul, Turkey, for shooting her winter Linen campaign, along with exploring the historical culture of the country.

Not long ago, Balcin praised Pakistani hair and makeup artist Shoaib Khan on her Instagram story. She wrote ‘He is a very good name artist’, followed by a text smiley symbol. Burcu Kiratli, who played the role of Gokce Hatun in the show, also appeared in a photoshoot for a Pakistani magazine. She stunned fans in a Pakistani wedding dress and earned praises from them.

We can certainly look forward to future collaborations between Pakistani brands and Turkish celebrities as all these examples are just the beginning. With Barbaros, another epic historical series set to release in early 2021, fans can see their favorite actor Duzyatan on the silver screen. Considering the popularity of Diliris Ertugrul and spin-off Kurulus Osman, it is likely that Barbaros will be also be telecasted in Pakistan with Urdu dubbing.

Only time will tell. Till then, keep visiting our website for everything there is to know about Diliris Ertgrul cast, characters, and latest news.